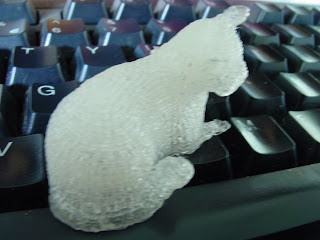 
In which your narrator, unable to find the "simplify mesh" command in a newly downloaded copy of Art of Illusion rashly asks the rest of the core Reprap team where it is to be found these days... read more 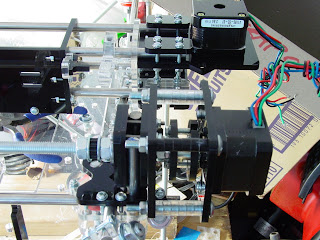 The Ponoko-inspired lasercut RepRap is now hopefully in its final iteration. I've built most bits at least twice, and I have tried to remain compatible with Ian Adkins' lasercut RepRap at BitsFromBytes as well as the original Darwin. I've taken the best from both in true Open Source manner, so we have:

Just submitting them for the Final Cut (thank you Pink Floyd). 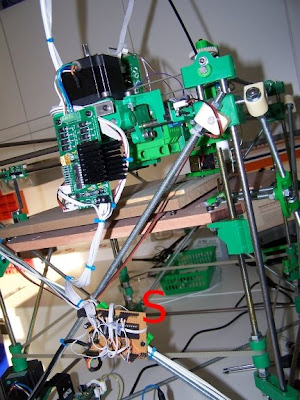 I stuck my stripboard Sanguino (red S) on my RepRap machine to see if it would fly. I want to do this so I can play with more than one extruder at once, for support material and so on.

Getting it to start working was pretty simple - I redefined the pins in init.dist.h for the Single Arduino Snap code, and the RepRap Java software started talking to it straight away.

With a bit of messing about I got the axes moving, then - when I put the wires on the pins I'd actually defined in the header file - the zero opto-sensors worked too.

But I got a lot of comms errors. These were much reduced by adding:

to the initialisation code, then letting the classes set the pins they actually use as they want. (Incidentally, the Arduino code doesn't do this for all the pins it uses - maybe it should...)

I suspect we have some stray interrupts from somewhere (like noise on unconnected pins), and also some code in there that switches off interrupts for too long, and so it loses bytes from the input stream.

The comms errors are still too bad to make the extruder go properly, though the temperatures are being measured fine.

If you want to play it's all at: http://reprap.svn.sourceforge.net/viewvc/reprap/trunk/reprap/firmware/Sanguino/

The pin assignments are in the OpenOffice spreadsheet here.

Tomorrow, if I have time, I'll see if Zach's upgrade just below cures some of the problems...

Just a quick bugfix release here. I fixed some bugs with the software that rendered it incompatible with Arduino 0012. Added some #ifdefs and brought in the new and improved timer code.

ps. If the Servo error bugs you, change line 43 in arduino-0012/hardware/libraries/Servo/Servo.c to: This is a breakout shield for the Sanguino. Similar to the Arduino Breakout Shieldthis board provides screw terminal access to all the pins on a Sanguino.

The board itself is designed for both new Sanguino users, as well as people with a pre-existing Sanguino. There is a full Sanguino footprint on the board. You can either populate all the components and have a single board, or you can populate only the pin headers + screw terminals and plug your Sanguino into the board. Since the space underneath the Sanguino is unused anyway, its like getting a free Sanguino!

Anyway, I sent it off to the board fab today, and will have boards back in about a week. They'll be available on the RRRF store, and kits will follow shortly. One of the things I'd like to improve upon is communicating whats happening in the project and new developments, even if the are not immediately available yet. So, today I'd like to announce a new board that we're sending off a new board to the manufacturers: the GM3 Noise Suppressor.

The GM3 motor is our dc motor of choice for our extruders: its small, fairly cheap, and fairly powerful. It also has dual outputs which is nice. Unfortunately its also a cheap brushed DC motor that generates noise as it runs. One of our team members, Nophead solved this all the way back in October 2007. I'm just now getting around to making a board out of his circuit.

This board will do some cool things in addition to being a noise suppressor:

Anyway, we should get prototypes back in 10 days, at which point they'll be available in the RRRF store, shortly followed by kits.

Update: board files released to SourceForge.

In tandem with the Arduino 0012 release today, I'm proud to release a new version of the Sanguino software as well! Its a pretty minor release, but here's whats new:

Also, I'm happy to say that you can now buy Sanguino kits from both the RepRap Research Foundation as well as Wulfden. Hopefully we'll have a European supplier soon. 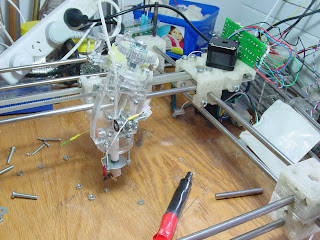 I'm off to CStem 2008 in Turin, who've kindly invited me to speak on RepRap. If you're in those parts next week, drop in!

They also wanted me to bring a working RepRap Darwin to demonstrate. What followed says something interesting about the cost of rapid prototyping. We looked into the amount we'd have to pay to transport the machine from Bath to Turin (it's not too heavy, but is bulky and delicate). It turned out to be both more expensive and more troublesome to do that than to buy and ship a RepRap electronics kit from the RRRF and a Bits From Bytes Silver RepStrap kit to Turin direct. So that's what we did. The CStem people have built and tested the electronics already, and are putting the laser-cut kit together as I type. When I arrive I'll help them with the last stages.

Mark you, last week we bought a whole working lathe for my University lab that cost less than a single RP polymer cartridge from a well-known RP machine manufacturer. How fortunate that it is possible to build all the RP parts of a RepRap machine from two such cartridges and still have quite a bit left...

All these parameters? WTF!?

There are, I will admit, quite a few parameters that the Java host software uses to control a RepRap machine when you select File -> Preferences...

I have (I hope) improved the documentation of these at:

I have been asked to blog pictures of my stripboard version of Zach's Sanguino. Here goes: 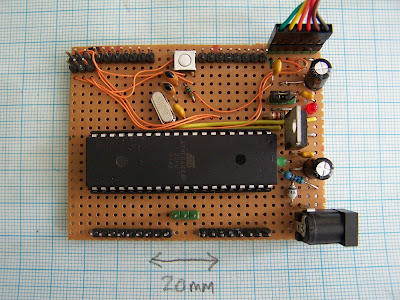 The cable top-right is the USB <-> TTL serial lead. The double-row 6-way connector top left is the ICSP connector, which you'll need to put the bootloader into the machine before you use the USB connection.

If you flip the board around a left-right axis in the middle of the above picture it looks like this: 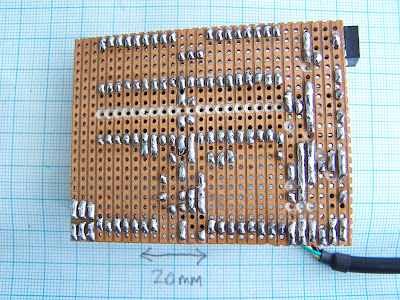 If someone has time (unlike me... sorry) to do a proper set of stripboard connection diagrams that'd be really helpful.

This movie shows an X axis using ball-chain instead of drive belt. I built it on a design based heavily on Ian Adkins' lasercut RepRap, which I decided to attempt to simplify a little bit. As you can see, it appears to work. I'll do another run and tidy up the X axis - I just subverted part of Ian's design that looked handy.

One fly in the ointment is that I can't yet print the neat little lasercut toothed gears on my RepRap, though the new Arduino boards should help.

You can't see it here, but I had to elongate the holes for mounting the X motor into Ian's bracket. I'll do a quick redesign so that it can take the motor Ian is using and the ones I've got - plus anything between. 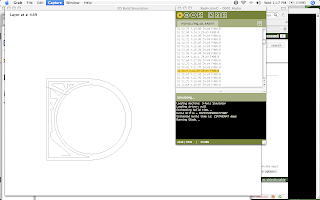 I needed something to pack part of my camera in to take it on holiday tomorrow, so I made a small pot with a screw top in HDPE: - 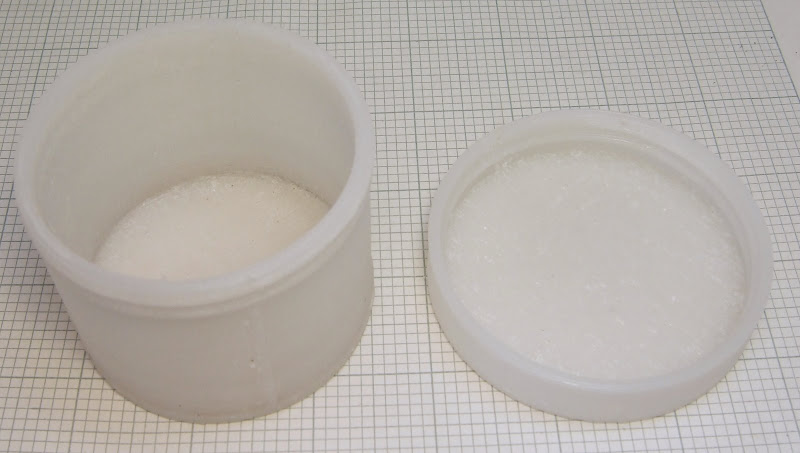