Again, as an Administrator with RepRap I want to thank all the developers out there around the world, for helping use reach this milestone.  We will continue to get cheaper, easier, faster, higher in quality, and more common through your hard work, thanks for all you do.
# posted by Unknown @ 6:51 PM 9 comments


Michael was also a long-term core team member and supporter at Reprap. 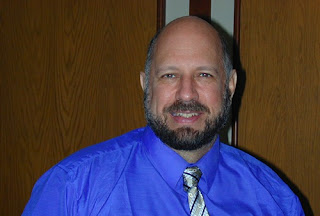 He will be missed.

It turns out that I've well and truly been beaten to the punch when it comes to reprapping  3D scanners and such, so this post isn't about hardware, but more the software / workflow I've been playing with.    I'm standing on the shoulders of giants here, none of the tools are mine, I'm just trying to build a workflow for a 3D "photocopier"!   one_object->scan->[stuff]->print->two_objects = awesome!


In my case this is:

On my mac, I installed the following to make this work  ( it's Processing based, so should work anywhere very similarly ) :
Processing 1.5.1 http://processing.org/download/
OpenCV Framwork http://ubaa.net/shared/processing/opencv/download/opencv-framework.1.1.dmg

( unzip the libraries, and copy the zip contents as-is to /Applications/Processing.app/Contents/Resources/Java/modes/java/libraries/ )

I then opened the spinscan.pde from GIT ( github.com/tbuser/spinscan )  with the Processing.app, and it loads, and runs ( press play etc ).
Once it's setup and working right , the  SpinScan software generates a .ply file.
for more, read here:
http://en.wikipedia.org/wiki/PLY_%28file_format%29

meshlab for point cloud -> stl / triangulation  , ( by many many people smarter than me) :
( use the latest meshlab ) .

once you have a .ply file, convert it to .stl with meshlab using these hints...
or here's one possible method:


1. open meshlab ( starts with an empty project )
2. File -> import mesh -> [browse to and locate the .ply file you generated in spinscan or similar ]
3. Open Layer view (7th icon from the left , looks like a pile of papers)
3. SUBSAMPLING: Filters > Sampling > Poisson-disk Sampling: Enter the Number of Samples as the resulting vertex number / number of points you want. Good to start with about the same number as your vertex to maintain resolution, or if you have a very large file, choose something like 10000 or so to reduce your point cloud to something easier to work with ) - you MUST tick the "Base Mesh Subsampling" tickbox or you'll get an error here.
4. COMPUTE NORMALS: Filters > Normals/Curvatures and Orientation > compute Normals for Point Sets [set neighbours = 10 or 20]

a. Filters > Point set -> Surface Reconstruction: Poisson, set octree to 11 (ish) [you should now see a new layer in the Layer Dialog to the right] but really strange border! ( increase this to 12 or 13 if you loose too much resolution on your object at 11. )
b. Filters > Point set -> Marching cubes RIMLS. Set Grid resolution to 1000 for a detailed mesh, or approx 200 for less details.
c. Filters -> "Remeshing , Simplification and reconstruction" -> Alpha Complex / Shape ( might work, not sure )

7. SAVE MESH !
save often as program crashes a lot! 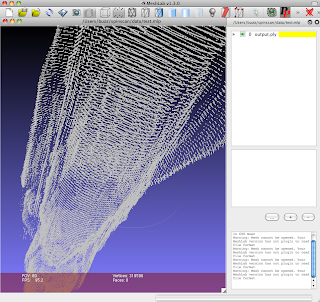 here's a way that someone else did it:
http://www.instructables.com/id/Using-Meshlab-to-Clean-and-Assemble-Laser-Scan-Dat/