It has always been the intention to fit a head changer to Mendel, I've had a go myself on several occasions but always ran into the same problem i.e. I haven't been able to do so without substantial modifications to the core frame of the machine unless there is a substantial loss of build volume (...I once had a design that ended up having a maximum build height of 2cm.very practical:D). Moreover, it’s more difficult to have a head changer for extruders whose designs are still in the early stages (such as the paste extruder). The main problem I suffered with is that regular designs of extruders are just too bulky without increasing the overall size of the machine, which incidentally I think is the perfect size as it is. Any bigger, and I would find it too big to find houseroom for!

Thankfully, eD had the idea of bowden extruders some time ago, which quite a few people seem have gotten work. Thus I think way forward for the time being is to implement a carriage for multiple bowden style extruders. Although this is almost certainly going to reduce build quality slightly. Some have already designed multiple bowden extruder carriages; here is my take on it: 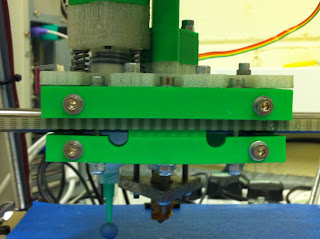 The main differences are:

1. Support for three extruders, either bowden or paste. (limited syringe size of 10cc).

2. All the multiple head machines I've seen rely on the extruders being exactly the same height in order to get the bed clearance just right to produce good builds. I've always found getting adjusting bed clearance is tricky enough just for one extruder, and I think it's likely that there will always be a build up of tolerances that extruder heights will always change by significant magnitudes. Even still, with warping and so on in the carriage, it may still be difficult even if the extruders were identical. Thus, the carriage treats each extruder clearance like pretty much everything else on Mendel, by allowing for adjustment. All extruders are attached to a mounting plate, of which on the underside are of series three captive nuts for each extruder arranged in an equilateral triangle. Three compression springs are then placed between the plate and the extruders, and cap screws are used to adjust the compression of each spring independently. (In the picture above I’ve only used the springs on the left hand extruder, it makes sense to fix the main extruder and adjust the other two to match it)

4. I needed to make some compromises, neither of which I'm particularly happy with, so that I don’t have to redesign the whole x-axis. Firstly the belt travels through the carriage itself on the 360 side, and secondly the belt is clamped from the inside out.

5. Finally its NOT makerbotable (its about 115 x 95mm), but it should be a fairly easy redesign to allow for only two extruders. . Even still, if you have a RepRap I'd recommend printing in PLA or using a heated bed or you'll probably run into trouble

Anyway, I’ve heavily modified the Paste Extruder, and used it in parallel with a bowden extruder I designed that based on Erik’s design but using a worm gear to do the driving (Designs to be on the SVN/thingiverse shortly). Gerrit Wyen (an intern at the RepRap Lab @ Bath Uni) created a simple script to take account of the offsets between the extruders and modify the GCode accordingly. Also Adrian has done so much I’ve forgotten exactly what he’s done, but its a lot:D. Here is a video one of the first prints; it’s a cube using PLA for the outline and top and bottom layers, and silicone sealant for the interior infill:

Whilst I did reverse the extruder to prevent ooze, and this is sufficient during a "normal build", its sat there for such a long time doing nothing whilst the paste extruder is working it still oozes horribly. For this reason I built little barrier to collect the ooze from hitting the part, but I think we may need to lower the extruder temperature a little when not in use. Anyway, here is the final part, which came out surprisingly well: 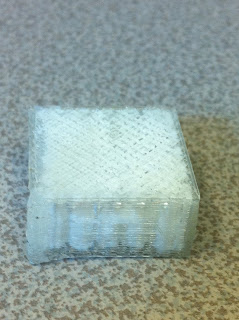 There are some more photos of the test setup and some other less successful prints here.

Comments:
wow, I'm blown away. This has gotta be the coolest Bowden work so far!

Seems like a decent setup for printing a phononic band-gap crystal. Is anyone at Bath university working on such a thing?

Yes - we have thought of doing phononic band-gap crystals and the like; we may also have the resolution to do similar tricks like negative refractive index with microwaves. But before we do that, we want to see what we can do simply by doping the silicone with ferrite to make it magnetic. Applying a field should cause it to deflect by quite a reasonable amount...