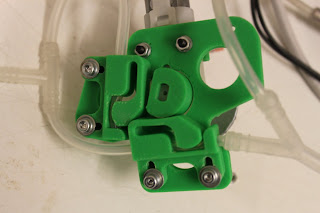 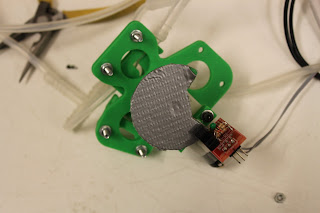 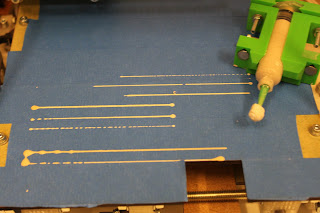 The above was my first test with the extruder on the machine, attempting to find an appropriate axis speed for a given pressure. The extruder started and stopped with pretty much no lag or ooze. I was manually starting and stopping the extruder by hand with a second optoswitch (We haven't got the firmware sorted yet), which is the reason for any large blobs at the start or finish. I was using the soluble support paste I described in a previous post, I guess each line shown in the picture above dried in under a minute.
All in all, the entire setup cost about £20, I'll be posting some more results next week after we get the entire thing to be controlled by the host software, which should also bring better quality results.
# posted by Rhys Jones @ 6:03 PM

Comments:
So you replace a motor drive with compressed air so that it can be switched off instantly, but then, instead of a solenoid, you have a DC motor to control the valve. Surely you have just put the delay back in again?

I am sure a stepper with a screw driven syringe will be much simpler and outperform anything with a DC motor in the control loop. I think it will also outperform compressed air and solenoid valves because it can instantly reverse and create negative pressure. This is my experience with extruding hot plastic and molten ABS is pretty much paste like.

The other advantage is you can dispense an exact digital amount of paste, whereas with a pressure driven system the amount dispensed is an integral of pressure, an analogue value.

A stepper driven syringe with "suck-back" is also the method used by F@H and they get good results with it:
fabathome.org/wiki/uploads/2/21/UVG1_sprocket_finished.JPG

So can you print plastic on top of the paste?

>So you replace a motor drive with compressed air so that it can be switched off instantly, but then, instead of a solenoid, you have a DC motor to control the valve. Surely you have just put the delay back in again?

Yup, theres a couple of reasons as to why, although I agree with your logic. From some crude test it seems to me that the ooze time (albeit without suckback) can be much much more than the time to open/shut the valve; but its mainly due to packaging. I’m very conscious of the fact that we need a head changer if any of this work on pastes is to be even remotely beneficial, and even then I think we are going to lose a ton of build height.

Using an air based system allows all of the bulky parts of the extruder to sit outside of the machine, which will gain us lots build volume.
WRT the delay, I agree we have put some delay back into the system (although it really is minute, I'll put up a video when I get it running nicely), but In my opinion it is a delay that will remain constant regardless of what paste is in the extruder. Whereas I think the ooze time/suck back time if we hadn't gone for a pressure based system would be dependent on the paste; although I have no proof to backup this theory:D

As an aside nophead I must say I've been reading through your blog for about a year now and it is always a fascinating read.

>So can you print plastic on top of the paste?

It's the same paste as I used previously so I assume so. But I need to get the firmware sorted so that it can automatically build objects before trying it properly.
You may notice that at the bottom of the paste extruder there is a rather odd wedge profile and some magnets at the edge, I also have a matching setup on the carriage of my mendel, this is so that I can quickly pull out the extruder by hand and replace it with a similar pinch wheel extruder. I'm not expecting it to be overly repeatable but it should be ok for some simple testing until a real head changer comes along.

So there is a way to reprap the air pressure system in some way, or this is other stuff that we cant reproduce yet? (add it to the list)

What about http://fabathome.org/wiki/index.php?title=Model_1_1-Syringe_Tool ? it seems to work well and support other materials as well

I'm just noting that the insides of a standard tire compressor are amazingly simple.

The ones I've disassembled have a 12V DC motor, a gear or two, and then a metal piston with an offset cam.

Rather than a bung, how about a bladder?

A sandwich bag made of thin LDPE film, for example, might do OK, although a tube barely larger than the syringe might be optimal. Turning the bladder inside-out before installing it into the syringe would eliminate almost any sliding against the inner wall.

Have you considered a peristaltic pump? I have some experience of medical sampling machines which either use a syringe driver or peristaltic pump.
Controlled with a stepper or servo, you can suck back the drip that is left on the nozzle. Also, using silicone hose inside the pump connected to the nozzle with nylon or laminate tube (much less elastic) limits the pressure buildup in the delivery tube.

Interesting. So how was the turn out? Have you reached a result where you can really say that you are satisfied with the outcome? Thanks for sharing this. Cheers!

Very interesting. I am just finishing up making my first reprap and am really more interested in eventually getting a frostruder for certain things I want to print.

I understand the reason behind wanting to have everything reprappable, that being the reprap community's mantra, but as for me, at least initially I just want to get a frostruder working even if it means I use nothing but vitamins. (Later on I would come and figure out how to reprap the parts.) So, for someone in my situation would you recommend starting with Fab@Home's frostruder or starting with Makerbot's frostruder (since those are both established solutions) in order to get something working on my reprap?