I've wanted to build a Reprap machine that didn't include a lot of ironmongery for a long, long time. Indeed, I developed a tool script for designing involute profile gears way back in 2006. Last year I milled gears and racks. This year I'm printing them. 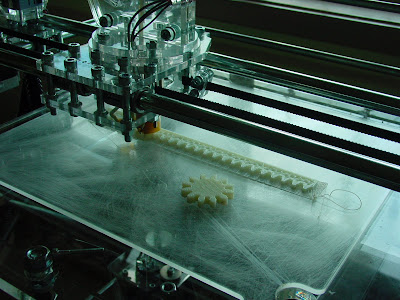 You can see the completed rack with the pinion here. 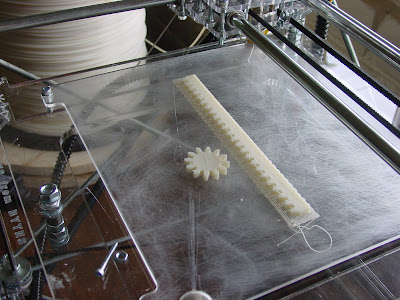 Oddly, though the rack was 190 mm long, it didn't warp significantly. 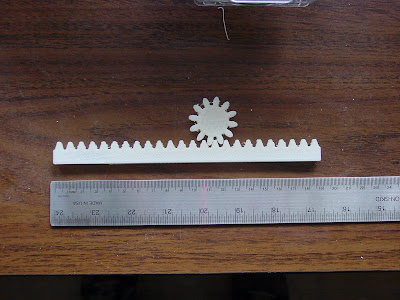 Comments:
Hmm. Your comment about "ironmongery," and my recent experiments with a new little 115 volt Hobart Handler 140 MIG welder that I've got, and the memory of something I saw on Make...
http://blog.makezine.com/archive/2009/04/sculpture_made_entirely_out_of_weld.html

Wondering if anybody's working on anything like a rep-rap that deposits steel. That'd be pretty cool, thought probably not good for one's electricity bill.

but can you get smooth motion out of it? :P

What's the pitch diameter on that gear?

My rule with warping is just oversize the raft and give it big density(over .5) and you can build as big as you want(at least with abs).

On the using a mig welder. I've been talking to guys I know that do mig welding, they say the big issue is making sure that the grounding is as good as possible and also the need to get another axis into our system, because different types of welding sometime need you to move the depositing head at an angle relative to your movement.

Odd, contrary to letsburn00's experience I always get some warping and would certainly expect something that long to warp. Even if the raft holds it down it warps in the hours after it it removed.

In its favour it is quite thin, but I am wondering if the serrated edges allow the plastic to contract without generating force along the length, and similarly with the circumference of the gear. A nice test to see would be a circle and rectangle of the same dimensions for comparison.

... last weekend i've got a 50Watt-fiber-laser and want to start some experiments with cutting plates and sintering steelpowder.

I've seen some comercial systems which heat the surface in a small area and blow metal powder in the melting region - it's called DLS (DirectLaserSintering) or such ... they're building all possible 3D-shapes without any support!

For steel and most other metals i'll need Argon as inert gas, what's a time-blocker for me ... but maybe i can do the same without inert gas with plastic-dust or glass- or ceramic-spheres i have in sizes of 50 to 100 microns?

Actually i'm working heavy on my CNC-mill, but maybe until Christmas there will be some progress with the laser too ...

Gene Hacker said...
What's the pitch diameter on that gear?

50 mm. I did another six toothed which is 15 mm last night. No problems with that one. Once you go under 15 mm, however, you start running into the problem of not having enough of an inner hub to cut a hole for the stepper axle, though.

That's certainly possible, but I expect that you'd have to resort to fairly large gears to accommodate the spring device. I am thinking of simply applying a mild compressive force along the line defined by the centres of the two gears to suppress backlash. That would let me keep the spring loading mechanism separate from the gears which lets the gears get really small. Does that sound like it would work, Adrian?

Even if the raft holds it down it warps in the hours after it it removed.

I'm looking at it this morning and it is still straight. I'm wondering if the lack of depth (5 mm) to the print has something to do with that. I'm going to make that rack again this morning as an L profile and see if there is any difference.

As well, I bought this filament way back in April, iirc. Most people use their filament pretty much straight from the producer. I wonder if, perhaps, the polymer chains in the filament relax over time?

Well, I can't test that hypothesis, but I can do the L-profile test right now. :-)

It turns out that the low height to width ration of the rack accounts for the fact that I didn't get any warping.

I did a bar that was 190 mm long, 20 mm high and 5 mm wide. It warped off of the raft about halfway through the print.

No silver bullet on warping, yet. :-p

Nop:I think the reason my machine prints withut warping alot is because I designed a build platform that I bolted onto my BfB build platform. I was going to make a video of how to make one on my next swing back into home.

I glued an A4(the biggest I could find in the hobby shop) sheet of ABS onto a sheet of plywood, drilled holes in the wood so I could bolt it directly onto the standard acrylic platform, then I put in a small clamp to stop the middle from popping up. I've found that a very good weld is easily achieved and tends to stop warping in it's tracks( plus it protects the platform from heater accidents.

You can see it in operation in the frames where my machine is printing here, i've found it works great(jump to about :20 past where it's really dark) http://www.youtube.com/watch?v=_mdC9KCn1og

Instead of gears that never fit perfectly and thus have backlash and a but of free motion when vibrating
I thought about using rope instead.

We can easily build cable-pulls instead
of gears. They can be fastened very
easy and can create a lot of force.

Take a slide that shall be moved.
On both ends you have a cable-pull
attached to it.
The ends go around a cable-roll with to meet below in one point.
There a motor has 2 spools.
One giving rope to the left cable-pull
and one taking it from the right one.
Adjusting the tightness is trivial
and can be done in serveral ways.

This would provide the accuracy
of threaded rods without their
length-limit and without their
issues of the rods are not perfectly straight.
It only requires parts that are trivial to print as opposed to
inperfect gears.

Interesting Build can build a few things using a "Rack and pinion" set. First need to get a 3D unit up and running.

Marcus, have a look inside old radios, where the 'frequency needle' moves behind a transparant display with the stations, they work like that.The knob you turn rolls a cord on and off in two directions, cord passes left and right over two wheels, in the middle the needle is connected to the cord and can move left or right.Even the tensioning etc is built in.

Is it possible to get a copy of your machined rack and pinion gear sets? I have a CNC router that I would like to try to make them on and for.
Thanks, Pete. lonetreecreations@gmail.com