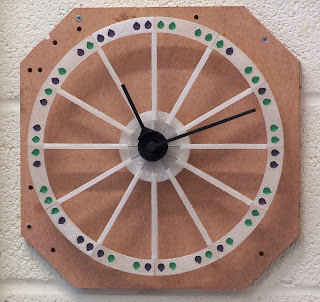 We needed a clock in the RepRap Lab at Bath University. So, of course, we made one.

It's shown mounted on the MDF build platform from ARNIE - the very first prototype RepRap that we made. See RepRap history at:

Naturally the hours are in binary...

Full build details and all files are here on Thingiverse.

Comments:
7 through 12 appear reversed. If you're going to use binary why not make a music box design with bump patterns to actuate the binary indicators.seedge

No - the numbers simply run round the circle, as they would on a clock with Roman numerals. (Clocks with Arabic numerals always have the numbers vertical regardless of their position round the circle; this would obviously not fit with a bit string.) Google Image "clock face" to see what I mean.

Why'd you build this in so many separate sections?

I love the simple elegance of the clock face. Would the whole clock, including a (gravity-driven, pendulum-regulated) movement and back-plate to mount the gears, be within the current state of the art of reprapping?

"Why'd you build this in so many separate sections?"

It's quite big, so the whole thing won't fit on the RepRap bed as one. I could have built it in 4 quarters, but 12 hour segments seemed more natural. And printing time is proportional to volume, so _how_ you split an object doesn't affect the efficiency from that perspective.

If one was prepared to make the clock quite chunky, then I think this would be possible. We can certainly do gears - I've just done some for an experimental extruder I'm working on. I think that the axles/shafts would probably have to be brass. There might be a problem with wear - particularly on the escapement. That would probably have to be made out of something quite hard (ceramic paste, then fired, anyone?).

Any plans to make one that snaps together, so as not to require glue?