It’s not often one gets to spring up to a podium to collect a prize, and even rarer in merely Bermuda shorts and bare feet. However, this didn’t put the judges from Bath University’s post-graduate conference from giving the RepRap project first prize. 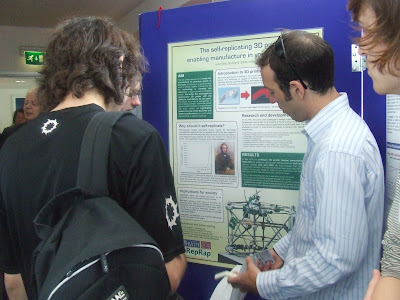 I didn’t have to say much. When asked what was interesting about the project I said “It’s going to change the world”. She was taken aback a little, so I rammed it home: “Honest.” I said. I was then asked to summarise the work in two sentences. I looked at the ceiling for a while. “Currently we ship consumer items from the other side of the planet because we do not have the ability to make things for ourselves. The RepRap project seeks to put manufacturing power into the hands of the people by delivering a manufacturing technology which can self-replicate.”

Comments:
Awesome, it's a simple statement but just so true!

Imagine gates et al playing with operating systems, we are doing the same, only our interfaces are even closer to our users!

I can name that tune in one.

Power to the people.

Well said (the two sentences)! And the prize is well deserved!

I think lots of people would've liked to stand in your shoes. (They can, of course, since you weren't wearing them :) )
The great part is that we can all create this change together. The community scales with the ambition of the project.