sid, who is a regular contributor to the RepRap forums, had an idea to get a soldering iron manufacturer to make a heater barrel assembly for RepRap. He approached a Chinese company with a specification and they sent him some prototypes. He forwarded one to me for testing. It appears that they ignored his specification and just sent a standard de-soldering iron element. Nevertheless it is a nice unit and looks eminently usable. 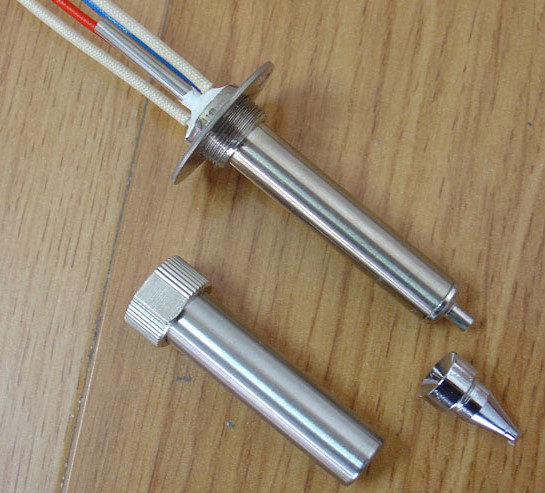 It works perfectly apart from one fatal flaw, full details in my blog.

Comments:
Shame about the flaw.

The ideas though feel to have some mileage in them.

Is there a de-soldering head that has a greater diameter tube that a ptfe insert/sleave could be put inside to just past the transition point ????

I don't know, why would you need a bigger hole for removing molten solder, which is a liquid after all?

We could use smaller filament though, but it might be hard to source.

I don't want to take a whole lots of space here to explain my thoughts on this topic, I just made a blog that I want to use to talk about improvements to the reprap project. I think that this design could easily be modified to work well. To get the detail see my blog at http://geo01005-ideas.blogspot.com/.
Thanks.