I woke up this morning thinking that we didn't really have a problem integrating conductors with our polymer parts except that maybe we hadn't been thinking about it properly. I drilled down into our blog and discovered that Ed did the hard work for this nearly a year ago.

Now this may have been discussed one or more times before and if it has I've just reinvented somebody else's approach. Here goes, though. Risk-free thinking. 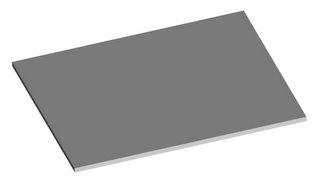 Put down a layer of polymer with your RepRap. 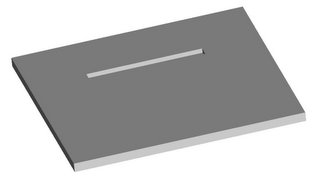 Now put down a new layer on top of it except where you want your conductor to be. Trade your Mk II extruder head for another Mk II that uses fusible eutetic filament for feedstock instead of polymer filament feedstock. Whether it's Wood's metal, Field's metal or any of half a dozen fusible eutetics is purely a matter of taste and local environmental regulations. Extrude your conducting eutectic into the slot in the second layer. Now here's the fun bit. 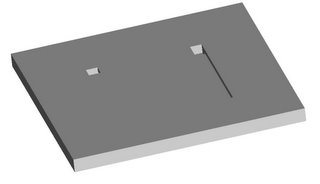 Trade back to your polymer extruding Mk II and extrude another layer of polymer on top of all that that leaves the tracks where you want the next layer of conductors to go. Notice that I've turned a corner with the conductor at the right and stubbed it on the left. Although the polymer will melt the conductor when you put it down over the conductor it will float on top since it is a LOT lighter than the conductor. Now trade Mk 2 heads again and fill the new gaps with fusible eutectic. 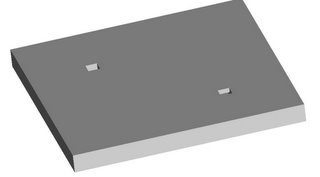 Trade back to your polymer extruding Mk II and extrude another layer of polymer on top of all that that leaves stubs for the two ends of your conductor. Swap over to your fusible eutectic Mk II and fill the stubs. Viola, you've got your conductor trace with the stub ends such that you can dip a soldering iron dialed down to it's lowest heating level into and stick in your components. Your conductor is completely protected by the polymer except where you need to attach components. Given a very high resolution Mk II extruding head this would be a natural for surface mount IC's and components.

Indeed, later on we might think about incorporating the grab and place features of automated PCB board populators into a very sophisticated RepRap and have it fit the components onto the board as well. :-D

Guys, we could fabricate magnetic coils for motors this way.

Comments:
A couple years ago I got really enthusiastic about conductive elastomers (artificial muscle) many films of which are difficult or dangerous to produce. Although I couldn't reproduce those doped polyaniline films, I was able to make a suitable substitute using live latex rubber, potassium iodide and graphite.
It doesn't have the same current carrying capacity as a metal but with a little tinkering you could certainly extrude it for at least some of your circuit features. A conductive glue would replace solder. Might not drive a motor but would probably provide static protection and antenna features.

Coils built that way are definitely ont he agenda, but due to the high surface tension of the eutectic, there is a limit to the minimum diameter of the windings.

To be honest, I don't think wrapping real wire is going to be that hard.

What's the maximum temperature of the depositor head? I know the idea was to use Polymorph and Wood's metal but could you up the temperature a bit and use solid solder and a polymer with a similar melting point?

***...due to the high surface tension of the eutectic, there is a limit to the minimum diameter of the windings.***

The conductivity of the stuff is, as best as I can estimate about 1/15th that of copper, so we wil perforce need larger diameters for at least that if for no other reason.

***but due to the high surface tension of the eutectic***

You've melted this stuff. Do I get the impression that it behaves like mercury? So does lead solder.

I wonder if it would wet better if you mixed a bit of ammonium chloride (a common soldering flux) in with it.

***During this process some of the flux inevitably combines with the solder. Flux designers typically take advantage of this fact and design the flux to lower the surface tension of the solder upon contact, thereby allowing a more efficient wetting.***

Using normal solder instead of exotic alloys would be wonderful, and AFAIK the reason for the exotic alloy was to not melt the nozzel assy, which is now made out of stronger stuff... except for the tip, which is make out of brass and solder (or is that only the case for the repstrap?)

So unless we can figure out a better way of making that last little bit, it seems we need to stick to substences with a fairly low melting point rel solder.

I don't know what kind of solder your talking about depositing but jewelers use a variety of "solders" with varying melting points (thus one piece can be soldered several times). A quick look in a jewelers catalog shows "hard" (high temp) solder that melts at 1365f (740c). If you use this for your nozzle you should be able to find an electrical solder to flow thru it. Alternatively you could micro drill holes in thin sheets of brass and mechanically attach them. At least for repstrap.
My concern for the process is with the converse of the problem stated in the main; if the melting points are similar is there a danger that the metal will melt its way down thru the underlaying polymorph and A: not be properly positioned (too low) to make connections, and B: short out underlying wires if such exist. Perhaps raising the temp of the plastic is a better idea.

Couldn't we coat the polymorph with a coat of that BBQ paint that Vik was talking about? Then we wouldn't be as limited to the temperature. Assuming it would work. Perhaps it's worth a shot?

I have this idea that keeps bouncing around in my head. Usually pops up on trash day. My recycling bin primarily contains aluminum cans, HDPE milk jugs and the odd glass jar. I can't help thinking that these materials could be used to make a workable circuit board. No idea how to go about it, though. Doesn't help that aluminum's a real bugger to solder.

A couple of other conductor ideas:

1. Would it be possible to, as Vik says, use plain wire? Not so much wrapping it but, say, heating it up a bit and pushing it into the plastic.

2. Instead of extruding molten metal, how about using copper tape and some sort of, um, tape dispenser?

The surface tension problem won't be helped by flux: flux just eats away at native oxides, making a "sticky" (to solder) metallic surface. Al is tricky to solder because its native oxide is so tough; the same goes double for Ti.

To lower the surface tension, use a metal-filled polymer as an interface layer; I know you've been thinking about dendritic Ag, but maybe Cu or Sn powder would work better. This is the same trick as Sn-plated Cu wire.

That way, you could just dip the thing in Wood's metal at the end, and let the metal stick wherever it wants to.

Alternatively, as I've been thinking, we could extrude a *paste* of fusible alloy and copper powder, which would have both a higher conductivity, and sufficient strength even in it's molten state to resist surface tension.

All in all, though, I think we're best off laying down actual wire, where it's feasible.

i really like the laying down actual wire idea. one way would be to lay down the base layer, with gaps where the wire should go, then lay the wire down with an additional head, then go over the track with the polymer head to 'lock in' the wire.

as a side benefit to this, it would be ridiculously simple to do wire wrapping... it would already be setup! especially if we're using a turntable setup.

I've been thinking about this one for some time. A heated wire holder would be able to embed loose ends in the substrate.

Rotating the wire holder coul dbe made to do a wrapping operation, while a separate mechanism will be needed to cut the wire in such a way that it is ready for the next anchoring operation.

We can also mould projections in the plastic to catch wires, and run wires across or between projections to make sockets.

A bit of acknowledgement is in order here. The idea for using molten alloy in a plastic 3D insulator to make circuits was originally had by a brilliant man called John Sargrove in the 1940s. It was his work that inspired Ed and me to follow. Sargrove used Bakelite and molten zinc. Check out

Incidentally, if anyone can find a picture of Sargrove, both I and the London Science Museum (whom I've asked - they don't have one) would be very grateful.

Are there any living relatives out there? His priginal name was John Adolphe Szabadi, born in London of Hungarian descent.