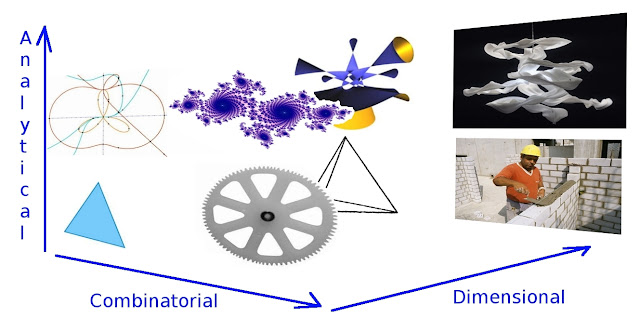 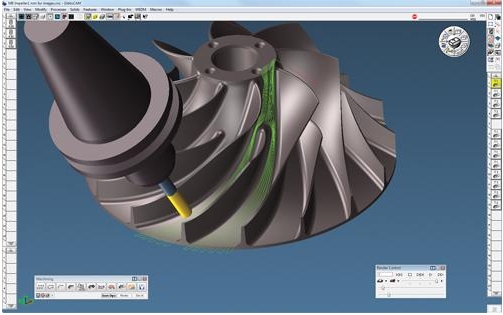 Comments:
Don't forget the fourth dimension, volume. X/Y/Z positioning tells it where to move, but you need precise control of the volume of plastic being put in those locations to produce accurate geometry. As with the Z axis, the X/Y coordinates are (currently, usually) generated with the goal of simplifying the E axis movements, but the leaps in quality we've made in the last few years (just the other day, I was printing 20-micron layers) would not have been possible without the move to stepper-driven extruders that we can control with comparable precision to the other axes.

You are absolutely right - rate of volume deposition is another dimension that needs to be controlled, as of course, are time and one or two temperatures. But all those are not an aspect of geometric complexity - they are dimensions in the sense that mass, length, and time are dimensions in the analysis of a scientific formula. When 3D printing, the spatial relationships that have to be manipulated are two-dimensional, whereas when cutting those relationships are five-dimensional.

and of course 3D printing can create shapes not only with less computational complexity than a CNC mill's Gcode generator, but also shapes that are totally infeasible to produce, such as objects with captive holes unreachable by a toolhead unless a custom one is made simply to cut that hole, and some other shapes that would require a milled workpiece to be turned over and the mill re-zeroed before cutting. That goes without even mentioning the material/energy efficiency.

This is a nice article on the versatility of 3d printing vs. other computer-aided manufacturing methods, but I was hoping to see a broader comparison to all other manufacturing methods (not just ones involving computers driving machines), including ones driven by hand like resin casting. I think that would speak more to the general audience.

It is both six degrees and six dimensions. They are orthogonal.

All forms of moulding and casting are secondary technologies; they need a primary manufacturing technology like cutting or adding to make the master or the mould. And it doesn't matter if the manufacturing is being done by a computer or by a person - the complexity of the problems are the same.

Based on your description, it seems to me that the best way to do z axis motion would be different from the best way to do x and y axis motion. But from the designs I've looked at ( mainly delta robots because I like delta robots ) it seems to be the fasion to treat all three axes the same. When you watch a 3d print video you see all sorts of skittering back and forth in x and y, at astonishing speeds. In contrast, the z axis motion is like the minute hand of a clock. You have to watch for it to see it. So why not design your printer to take advantage of that difference? I'm fairly new here but I would think I would have seen a hint somewhere.

Based on your description, it seems to me that the best way to do z axis motion would be different from the best way to do x and y axis motion. But from the designs I've looked at ( mainly delta robots because I like delta robots ) it seems to be the fashion to treat all three axes the same. When you watch a 3d print video you see all sorts of skittering back and forth in x and y, at astonishing speeds. In contrast, the z axis motion is like the minute hand of a clock. You have to watch for it to see it. So why not design your printer to take advantage of that difference? I'm fairly new here but I would think I would have seen a hint somewhere.

You are right. And the vast majority of designs do just that, using fast timing belts for X and Y, and slower screw drives for Z.

And it's five significant dimensions, even though technically there are six. But rotation about the cutting tool axis doesn't count. And degrees of freedom and dimensions are mathematically the same thing. Check out work on configuration spaces for more details.