I  thought that it would be useful to take a standard and widespread bit of RepRap electronics - the Sanguinololu - and give people a way of easily upgrading it to use a much more powerful processor. 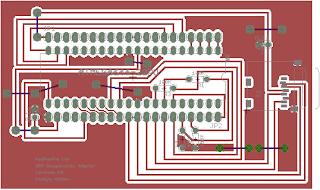 This is the result.  It is a PCB that you plug an MBED NXP LPC1768 ARM development board into.  It then plugs into the socket previously occupied by the ATMEGA chip on the Sanguinololu.

It also has an SD card socket built in.

It has been deliberately designed single-sided with fat tracks and big gaps to make manufacture easy by DIY etching or milling techniques.

All the details and files are in RepRapPro Ltd's Github repository here.

One caveat - this is pre-alpha: we haven't had time to make and test it yet...

Comments:
Would you say that the LPC and/or mbed products are the direction the core of the RepRap group seems to be going, or is this merely a foray into this territory, and we shouldn't read too much into it?

Hey this is exactly the same chip the smoothie firmware runs on : http://smoothieware.org/

There's a constant evolution going on. The concept of the "One True Reprap" was only needed for our initial reference design's documented reproduction. It's therefore very hard to claim a particular heading as being the shining path.

I'm with Vik. In RepRap the core tries to go in every direction...

I have an mBed sitting at home that I brought for a project that it never got used for. What are the advantages of using an ARM over the ATMega? I mean the ATMega seems to do all that it needs too.

I ask as I really want to find a home for my mBed so if you need any testing I will be more then happy to give it a go :) I'll look at getting the board made, but wouldn't have a clue as to how to get the firmware going :(