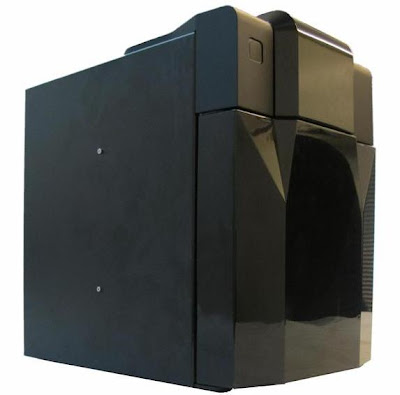 Comments:
When last I looked at the Up! they had a big disqualifying problem for me: their software was Windows only.

I don't think that that has changed.

Honestly, no surprise here. Likely, RepRap helped a lot to bring the UP!'s price more down to the bottom than it would be without RepRap, but that's it. Mass production is always way cheaper than individual manufacturing of the components and dedicated, payed software development gives always a lot earlier results than this tame-the-chaos model used in open source. Simple economics.

Is RepRap doomed now? Is it sort of done, obsoleted by it's own success?

I think it's a partial "yes". These people eagerly wanting an 3D printer and looking for an mostly assembled kit to get there as quickly as possible will simply vanish. They'll buy an UP!, 3D Systems Cube or something similar. Also, just like nobody is proud of having done a 2D laser print these days, before too long doing a 3D print will be an non-issue, a commodity.

But I also see a future for the RepRap community. Just like there's a future in open source software. Additionally to the future of OSS (easy customisation), there's something else: the pride of having something built yourself. People are and will be proud of them selfs if they have built their own steam engine, their own 2D laser printer and, in our case, their own 3D printer.

I think besides the self-replicating part the making 3d printing available to average persons is one of the goals of RepRap right? Getting the price down from €10000 to €40000 to €1000 for a complete product is a necessity. While the RepRap is great for the nerdy folks making machines that are bigger, more precise or faster it is not for the average person.
I think both projects are already learning from each other. While I think the Up! Would never have existed without the RepRap, the auto generated same material support displayed on the Up! is only now starting to become useful on RepRap slicers.
I only hope both products become better. An easy consumer 3d printer for my parents and friends and an awesome self-build open source one for me.

I will not buy this or any other Chineese crap.

I wait for team work in 20XX? How did we get here?

Reprap is based on the principle of biomimickry. You can not buy an UP! and make an UP! for your friends. You can make a Reprap though.

I think this is a good thing.

...and I look forward to the day when you can make make a Reprap for free by recycling your own garbage.

I don't believe that comparing an old Darwin-derived RepRap to the latest Up! is a fair comparison. I think a modern Mendel derivative (like a Prusa Mendel 2 or a MendelMax) and using the latest Slic3r as slicer would be a much fairer comparison. While I'm more of a fan of the Prusa Mendel for cost reasons, I think the MendelMax would easily top this in print quality.

I have to agree with the author...

Look at my gallery of 3d printed Math Art designs done by the Thingiverse community, clearly the UP! prints are more of high quality than reprap's variants prints - especially when support structures are used..

The UP! manufacturer is part of a large industrial conglomerate in China which have shared their Pro software with the UP! division.

Then I tried to order one. The UP! website requires a country chosen from a drop-down list that does not include English, Britain, Great Britain or the United Kingdom. So I couldn't buy one direct from Hong Kong.

Then I looked for a local reseller. Found one company in the UK reselling but with over 40% markup so the price is no longer competitive.

I've ordered a Printrbot instead...