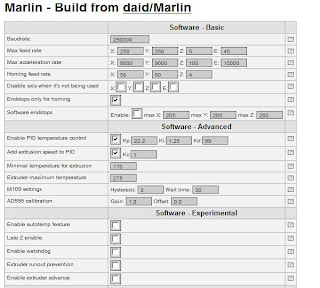 Marlin 1.0
Marlin has finally reached ver1.0!  The list of improvements is is too long to mention.  Marlin is the firmware out there that gives you the most control over every aspect of your RepRap.  Marlin can leave you a bit overwelmed because it gives you so much control of every aspect of your bot, but his can be mediated by using Daid's great web app for setting up Marlin.  From what I have seen Marlin works great on almost any machine you throw at it.  Marlins specialty is dealing with Bowden cable extrusion.

*Sorry I goofed the name at first Daid!  Would figure the name of the website would be enough of a hint! 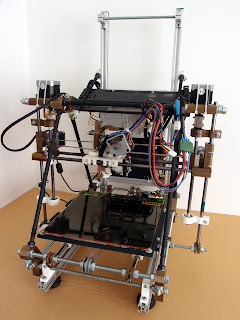 Credit RichRap who writes a great blog and is selling his RepRap on Ebay!
Sprinter Firmware gets Look ahead!
Marlin might be the firmware for RepRap with every knob exposed, Sprinter is one of our most stable/easiest to work with firmwares out there.  Kliment, the maintainer of Sprinter has accepted a pull request that puts look ahead into Sprint Firmware under the experimental branch.  All the beauty of look ahead firmware with the eaes of use of Sprinter.  Fun!

PrintrBot Store goes live
Printrbot, and it's earlier released cousin Wallace have really made a spash, and finally Brook and his team at Printrbot have opened their store.  On offer they have a $550 RepRap kit, which puts them at the lowest cost RepRap kit in the world to my knowledge.  Congrats guys and good luck!
A small note, The Wallace/Printrbot design does reduce the cost of a  RepRap by around $50 dollars by reducing the frame reinforcements.  While at low speeds this is not a concern, at higher speeds, and especially at higher speeds and higher Z axis positions this can significantly reduce build quality.  But on the other side of things if you purchase the Printrbot kit, and wish to upgrade the machine it should be no more complected than purchasing more fasteners/rods/belts and transferring the motors/hot end/electronics and some of the RP parts to a full sized Prusa or MendelMax.
Second note I have seen no independent reviews of the electronics or Hot end yet, so unless you like living on the edge I would hold off on a purchase until the Hot end/Electronics have had time to be kicked around by the community.

RepRap Build Parties Around the World! (Above is a time lapse of the Party in Berlin this month)

RepRap build parties are getting more and more popular, with them happening all over Europe and the US.  These are hugely popular because it's a win for all involved.  For a person getting involved with RepRap they get a RepRap for just a bit more than the normal price to self source one ($400-$650), ease of assembly, plus support from start to finish.  I have yet to see the build party that didn't have the vast majority of particepents leave with a fully calibrated and assembled machine.  For the people putting them on they usually make enough to compensate all involed and have a 3 day robot party. 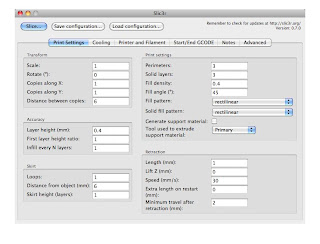 The development pace for Slic3r has been amazing.  If you sit in the Slic3r IRC you are likely to get an auto update for 3 or more major updates PER DAY.  The Changes to this software since my last update 3 months ago are amazing to behold.  Added at this point are Support Material, Dual Extrusion, Cooling logic, 3 upgrades to the slicing engine (It's now as or more tolerant than Skeinforge), AMF support, Makerbot/Mach3 support, Multithreaded (that's right it's EVEN faster), thinwalls, etc etc the list just goes on and on.  If you have not tried slic3r PLEASE try it today.  His software is of course free like speech, but he takes donations :) 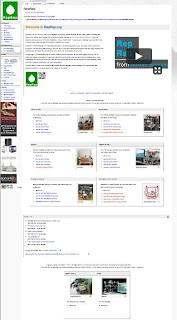 When I took on trying to update the front page of our Wiki to add MendelMax (Because I thought it was a shame that Prusa was very popular for many months before we got it on the front page), and I wanted to add Wallace/Printrbot also (even though I HATE the sacrifice of print quality to save 50ish dollars), I didn't realize it would be so contentious.  Sad thing is I find myself agreeing with both sides of all the above issues and have no clue of a fair way to handel the front page.  I draw the line that the front page MUST, have RepRap Pro Huxley, Prusa, MendelMax and Wallace/Printrbot.  The issue is that Printrbot, MendelMax, and RepRap Pro Huxley are all "commercial" designs that are pretty close to non commercial designs... how do we say yes to them and Not also have Longboat Prusa, Luzlbot Prusa, Ifeelbeta Prua, Clonedel Prusa, etc etc also up there, and then by all things reasonable how do we put them in a fair order?  I don't know, would love to know if the community has a simple fair way around this problem.

Nophead has been teasing the community for weeks with his Mendel90 design.  It's finally been released for your printing pleasure.  It's printed mass is a little higher than Prusa and a little lower than Mendelmax.  Will be interesting to see how popular this design becomes!  Thanks Nophead!

Note Nophead has released the source! (Thanks jamesmoe from the IRC). 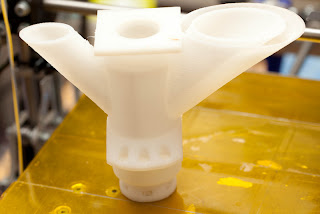 You had my wife at Chocolate Extruder


There are a few paste extruders out there for RepRap, but non that I have seen to date have integrated heating for the substrate, which is pretty epic.  I am holding off on printing this one till I get my MendelMax with quick release extruder finished, but honestly I am excited 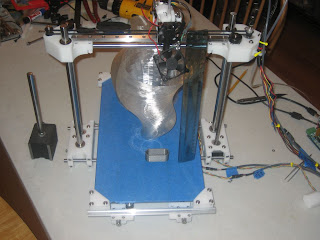 The Printer with No Name

Rick Pollack, the man behind the MakerGear Prusa and Makergear Mosaic has came up with a new design for a Printer.  At 1st glance I really though it was a knockoff of a Wallace/Printrbot, but he was actually working on it before either came forward (And when you look closer, while it might have the same general shape, it's approach at ever corner is drastically different).  He is trying to determine if the community would be interested in this as a commercial product, or even as just a RepRap.  Why not go over to his IRC and let him know what you think?

Comments:
Wallace doesn't just cut down the vitamin parts, it also prints in 3/4 of a Mendel-sized plate (leaving room for the extruder in the 4th quadrant). I'm not entirely sure how printrbot compares, but I imagine all the cartesian bot parts should fit on a Mendel plate. Minimal replication time FTW!

Maybe the decision on what to highlight on the main page should reflect the level of activity on the wiki. For instance, NONE of the 'Makergear Prusa' pages have been created. IMO, this should disqualify it from the homepage.

The quality of the 'How to get X' page could be used to judge whether X is commercial or not. For instance, there isn't a page about self-sourcing a printrbot, so i would consider it 'commercial'. Naturally, this could easily change as the documentation improves.

how about treating the different versions kinda like you do different languages on the wiki homepage?