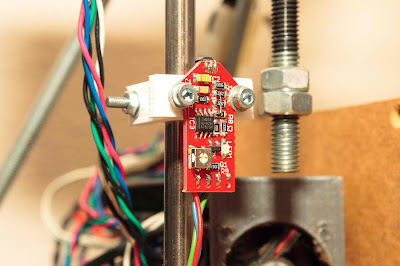 
Hall-0 effect sensors have an advantage over both mechanical endstops and optos because it senses distance instead of waiting for contact, so it should never wear out like a mechanical endstop, and not be affected by lighting changes in the room like an opto.  Of course this is the open source board upload by Jos to the RepRap Wiki.  Being open hardware you can get the eagle files off the wiki or buy them from Ruben-Ikmaak for 9 euro with cables and magnets included at his website.

3d printer designed by Maxbots and based on the Prusa Mendel. It is a true reprap, using printed brackets, but instead of using threaded rod for the structural elements it uses inexpensive aluminum extrusions. This gives a huge increase in rigidity for a minimal extra cost (Self sourcing will cost about $80 more than a standard Prusa when purchased from the recommended suppliers). The required extrusions are available world wide from a variety of suppliers.

MendelMax costs a bit more, weighs a good bit more, but  the frame is much physically tougher, and looks 500 times sexier.  I have yet to see any parts for MendelMax go on Ebay/Emakershop, but Lulzbot is selling the parts.  They also took a pretty cool pic showing how strong the frame is.

One other must share image, what happens when you mix Makerslide, & MendelMax 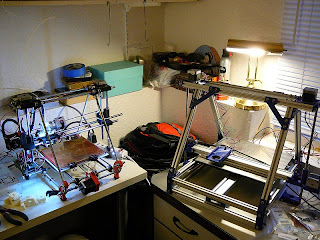 Printrbot is a a smaller scale Reprap design, very similar in size to the Emaker Huxley, but the standard "Mendel" design has been dropped in favor of a very simplified base frame and a floating y stage (The Y axis is supported only in the middle).  The core team of Printrbot where nice enough to let me have the files pre-release (I think release will be in late December) to help out in the Openscad conversion.

As you can see, I did not get the chance to finish the bot over the weekend, so I hate to review it.  Plan is to have review of the bot after I get a 1st print (should be later this week (I hope)).  But I can tell you they are for real, and the parts will go together into a functional machine.  How well it prints in the real world, and whether the Axis's are as robust as Prusa, I will fill you in on that later. 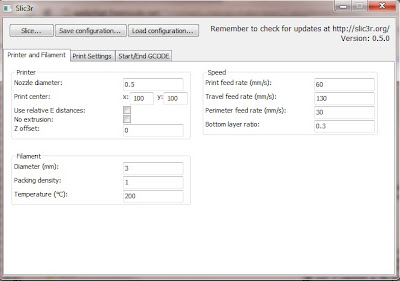 For the last 3 weeks now my go to Gcode generation program has been Slic3r  (Found very few things it does not slice, but if it does not I just use Sfact).  This slicing engine is a complete ground up rethink of Gcode generation, and honestly I have never had anything that is this easy to set up.  Only things you need to give it are nozzle & filament diameter, packing density (if your E step/mm is dead on this should be 1), your requested extrusion width/height, and your set up.  Generating Gcode is about 10 times faster on big things and 2-3 times faster on small things.  It's definitely worth checking out.

Comments:
Sadly the Hall-O only has a schematic, not a board layout available. Open Source Hardware should be better than that, guys!