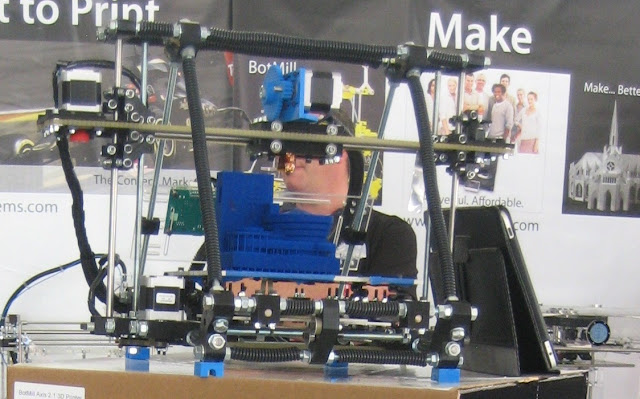 Above is an enlarged image from 3D Systems Botmill Branches Flickr account.  Do you notice anything strange about the build quality of that part?  It was NOT printed using the wades extruder above it.  This was a fun catch by Prusajr while visiting the United States for Maker Faire and the Open Hardware Conference. 3D Systems makes some wonderful machines, the printed part on this RepRap did not come off a extruder based 3d printer.

I thought maybe someone not related to 3D Systems had just set it there, but when I went back and looked though their official website, there it was on their Flicker Page.

Note: I contacted Cathie Lewis, the VP of Marketing for 3DS and she said confirmed that part did come off one of their Personal 3d Printer and was an unintentional mix up by one of their employees that was corrected by the 2nd day of the Maker Faire.  I only posted this so that any of the people at the Maker Faire who saw the part would not be confused.  We are not quite there on the print quality, but we are getting closer every day. :) this is typical sales tactics from major RP companies.

They put parts on display and let the uneducated viewer assume it was printed on the machine they are trying to sell you.

The RP industry has allot to learn before they are able to sell to the mass market.

What do you mean to say Dan?, that these are really not the quality of the prints?

No, they knew it's not printed on RepRap. I directly asked them second day of MakerFaire. And the answer was that it's not RepRap print. I asked them if its not false advertising, they said, they dont think so ;-) Probably because they didnt know who I am :-D