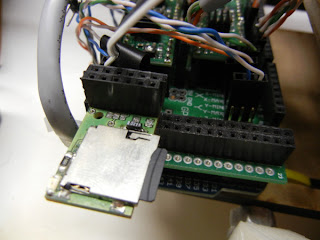 Great review, Neil! Thanks for pulling it all together! :-D

...drives four steppers. It uses the Allegro A4983 which gives you 2 amps per phase at up to 30v. Sparkfun sells it for $65. If you want to make your own you can get the Eagle files off of the Sparkfun website. The Sparkfun board can be had from several other robotics stores.

Brian's little website is worth a visit, as well.