The end of the String Wars

It appears that the cabling approach to z-axis positioning that Ed Sells tried and abandoned on ARNIE, the precursor to Darwin, in 2006 can be made to work.  Ed was trying to move the cable with something like a friction wheel, if I recall correctly and couldn't get sufficient friction between the wheel and the cable for reliable movement.  I solved that by using a lead screw and thrust collar attached to the turnbuckle in the cabling loop. 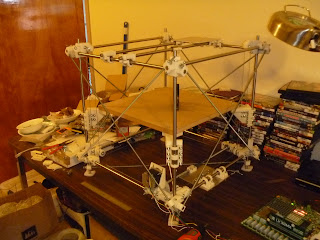 Hopefully the use of a single lead screw will go some ways towards curing the slight periodic unevenness in print layering caused by wobbling in the four leadscrews used in the Darwin and Darwin-derivative Rapman printers.  Kaizen is a very powerful approach to technological advancement.

Comments:
does this mean it's all tested and working? huge step forward if so :)

@Chylld I'll have to put the digital calipers on it to check positioning repeatability and then eventually print some things with it to be certain. Hopefully, I'll have gone some distance towards getting rid of the periodic layering behaviour that we see with Rapman.

So, no, it's not absolutely certain that this particular manifestation of the concept is working at 100%, but at this point things are looking very positive.

Is there no way of having a closed string going around 540° instead of only 180° around a rubber wheel?
That would avoid any low friction problems.
It'll, however, lead to a shift in the string along it's 2 wheels. But that's a fixed angle and can be compensated for by rotating the string out of the movement axis direction by that angle.