One of the problems with PLA is that it shatters when stressed, rather than bending gracefully. This problem is solved in ABS by adding impact modifiers - basically synthetic rubber blends - to give some flexibility under stress. Luckily, I found an impact modifier that is compatible with PLA and does not significantly alter the melting point. At about 1/3 it makes PLA this flexible without fracturing: 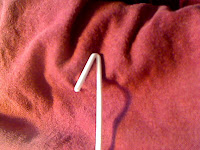 I've got to run a few more printing tests on it, but it's looking promising as a material that offers the durability of ABS with the reduced environmental footprint and ease of extrusion of PLA. Oh, I suppose I'd better figure out what it'll cost me too :)

Update: I flexed some back & forth 100+ times and got bored trying to break it.

Printing with it is much trickier than plain PLA. It wants to coalesce into one lump, and you really need cooling between layers.

Comments:
Man that's going to be fun stuff to play with.

Have you extruded with it yet?

I'd be interested to hear how it affects the extrusion properties, particularly the force to extrude and the temperature.

this is interesting, and a good development, i am curious to see how well it prints, i hope to order my Huxley soon and i would be more than willing to try printing with that.

i would also like to see how it affects its compression, tension, and sheer strengths

Well go on then, tell us what you mixed in it, because if the plasticising agent isn't non-toxic and doesn't biodegrade like PLA, then there's not really much point in mixing it in, is there?

I'd love to do tension and fracture toughness tests on FFF-moulded PLA specimens, but it seems there's bugger-all funding for me to do a postgrad research course at my uni. :(

Very promising! Hopefully this means I won't have to import my plastic from Germany anymore :)

Will this perhaps require some active cooling per layer? Compressed air cooling or something of that nature?

That's something I was thinking about some other thermoplastics which would basically require active cooling right after extrusion.