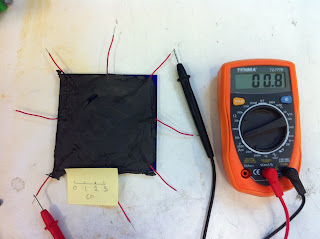 Comments:
I was working with a polymer filled with stainless steel fibres recently. You have to have a trace of a measured cross section so that you can derive the ohm-cm for the material. When I did that with my material, it turned out to not be at all suitable. :-(

I've just cut a small strip of the film.

The cross section is about 1.3x1.3mm and its about 18mm in length. The resistance came in at 9.5ohms

Given that we could still up the concentration of the nickel (the sample above wasn't saturated) a bit. I'm still hopeful.

P.S Adrian and I once calculated the optimum resistivity to be 2 x 10^-5 oh meters. At that level, and the resolution we can achieve we thought we could do both useful resistors and conductive track by changing the cross sectional area.

Is this the carbonyl nickel described on this wikipedia page? It says the LD50 of the stuff is 3ppm... I hope it's not the same stuff :O

I would use graphite with cellulosic resin as the binder with isopropanol as the carrier. This is what's normally used in professionally printed circuits that aren't worthy of silver or platinum (both of which work a lot better but $$$).

Carbonyl iron is used in some paint applications, but it's not conductive enough really. Nickel carbonyl is relatively dangerous stuff - and fairly explosive without the proper shielding gas.

Powdered nickel would be fairly easy to deal with and fairly conductive as well (probably not as nice as graphite.)

Its not the same stuff Rob.
The health and safety data sheet for the stuff I have is available here:
http://nickel.vale.com/products/_pdf/msds/Nickel%20%20200_EU_EN.pdf

I've been in touch with the manufacturer.

The powder I am using is just a dendritic nickel. It is is however made from Nickel carbonyl gas at high pressures.

So it's a catalyst and other fun, but much less dangerous stuff.

Try reading this article it's related to the type of paste your are making.