I've just had the first sample run of glow-in-the-dark PLA back from the factory. I didn't change the extruder parameters at all from using ordinary PLA and it seems to extrude absolutely fine as far as I can tell. So, here is (as far as I know) the first intrinsically glow-in-the-dark Mighty RepRap Power Ring: 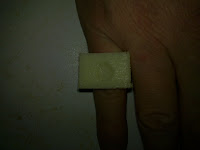 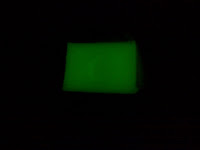 The phosphor pigment (no actual phosphorous used) needs to be mixed into the plastic at about 10% loading, which is an order of magnitude more than is normally used for colouring. Getting powder to evenly coat the granules at that density is hard, but Alan Booth at Imagin knows a trick or two and it came out beautifully even. The only problem is the cost, which by the time I've got 100m of 3mm filament in a bag is about NZ$60. That's using the cheaper phosphor too - not because I'm cheapskate but because the really good stuff isn't available in quantities of less than a tonne!

Have you seen the glow under black light PLA from UltiMachine?

What a neat addition to have added to the printing materials available.

The need for a Gatling gun type of extruder mechanism is becoming more nesersary.I think its possible to build now if using bowden filament drives. Who will be the first I wonder.

Very nice. I've been waiting to see something like that for some time. I didn't realize that there's ~10X the amount of pigment for glow-in-the-dark vs simply colored plastic, but even with the cost differential, I'd be happy to buy a few dozen meters of it - it's not like I'd be trying to print a phosphorescent Mendel or anything (at least not without an Arts Grant).