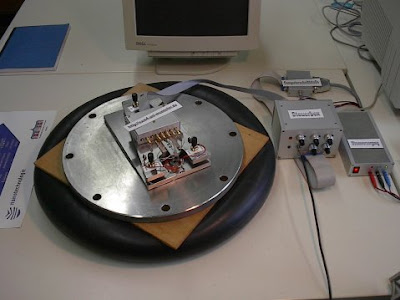 Yesterday I ran into Jochen Klingelhoefer of Lab Minds. He introduced me to the SXM Project - a project to distribute an open-source scanning tunneling microscope (already working) and a scanning force microscope (under development).

How cool is that? Many of the parts are eminently reprappable too.

Just to whet your appetite, here is a picture of a 4 nm square area on the surface of a piece of graphite made with the microscope: 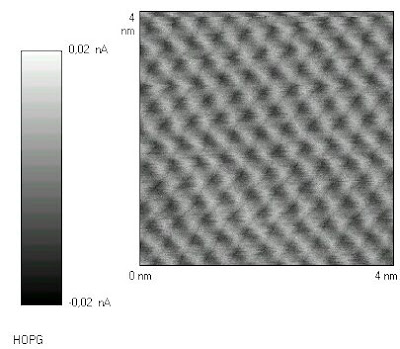 There are several of such projects. Another one that I found is this:
http://www.geocities.com/spm_stm/Project.html

Yet there is nothing stated about a license.

Remember most of the STM control system can be considered a very small scale 'mechanical bot. Perhaps we could do EDM with it an write instead of just reading? Or remove material in other ways, because I'm not very sure about material properties at that scale.

Atomic Force Microscopy might also be a viable alternative. It's been done with 3D printed parts:
http://www.nanowerk.com/spotlight/spotid=2304.php

In the context of AFM, one proposed writing technology is known as dip pen lithography.

As to properties on that scale, an effect vaguely similar to EDM might be achieved via the phenomenon of electromigration, but that would be tricky to control.

If you relax any commitment to direct writing, and are willing to explore ways of patterning a resist layer, you might have access to vapor deposition, liquid-phase processing, and the whole host of technologies that semiconductor fabrication has developed so completely.

Adrian: You certainly got in on the ground floor for open source hardware development with Reprap. It's getting really interesting now with projects like this coming on line.

... you can buy 'low-cost' piezo drives with controllers for some ten to hundred USD and assemble your own nanostage.

I have some 'fingertip'-drives bought 9 years ago for 60 USD per demo-kit and some piezolegs bought 8 years ago for 400 Euros per drive and controller.

This sort of linear piezo-drives have travelling ranges of some ten millimeters and around 100 nanometers per 'step' ... if needing higher resolution, you can change the driver and apply a bending mode between the coarse steps, as known with tne bulk-PZT's.

I think with such a device you can make some 'coarse nanowork' or micro-engraving, but i made the controlling by microscope-cameras and a human operator instead of measuring and closed-loop per PC ...