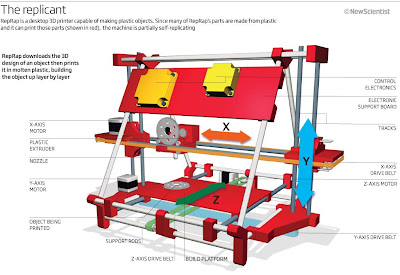 The New Scientist is running a feature article by Tom Simonite on RepRap and its derivatives this week. Tom visited the RepRap Lab at Bath University, the London Hackspace and other places a few weeks ago to research his article.

To read it, go to this link.

Comments:
I think they swapped the Y- and Z-axes in the picture...

Yeah. Or rather, they assigned them arbitrarily.

I don't agree with their claim that these machines suffer from generational degradation though - we aren't making scanned copies of the parts in the parent machine, we're making instances of the original computer model, which can be invariant.

And if machines can't make things more accurate than themselves, how did humans ever bootstrap themselves up to the level we're at now, hmm? :)

Yes, it's surprising that someone like Hod Lipson would have made such an error about generational degradation. The key point is that reproduction is not an open-loop process. Calibration and adjustment of the machine occurs during assembly, so the accuracy does not degrade; in fact, it's possible to use a poorly-printed machine to make one that's much better.

As Pelrun mentions, this is essentially the history of machine tools; carpenter-and-blacksmith-crafted tools were used to make the first machines, which were then put to use making new and better ones.

Enough people are making this incorrect assumption that we should probably put more effort into addressing the issue on the wiki.

Yes - I agree. I try to make this point every time I give a talk. As you say, the entire history of the industrial revolution is in the reverse direction...

- Adrian Bowyer (signed into the wrong Google account above...)

Why don't you get rid of that blogger-banner? looks so old-fashioned :(

Hi, can a representative from reprap please get in touch? I'm a journalist and I'm writing a book. I'd like to interview someone at the organization.