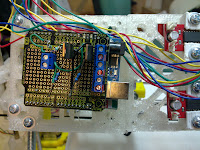 I got irritated by the thought of a large chunk of wood that could be replaced by printing. So I'm tinkering with these modular panels about 100mm a side, scaled to fit the frame 3 abreast using the same fittings as their wooden counterpart.

Here you can see an Arduino with a simple prototype board on it. This holds 2 of TIP122 drivers for the heater and an experimental DC extruder. Alternatively it can hold 2 EasyDriver stepper controllers. Basic, but hopefully reliable. 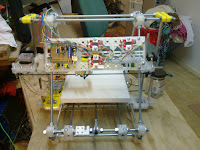 They interconnect with 2xM4 16mm screws and trapped nuts. Objects can be anchored on pillars with 40mm M3 or M4 screws, or against the module's surface with 30mm ones. Here are some preliminary prototypes. I've attached them to the current "Simplified Kiwi Mendel" known more affectionately as Lemon Slice.

Speaking of slices, I caught my hand on a falling mandoline and have to rest my left hand. fortunately thumb works so I can sneakily enter blogs from bed on my phone...

Comments:
it looks like you're printing on a pizza box... and i thought all that talk about extruding food stuffs onto a heated platform was just a joke! ;)

all joking aside, i've been thinking of something like this to be able to print out, say, a 5 inch dia cylinder, from within a 5 inch dia cylinder build chamber (for the SLS printer). I'm thinking something like a set of interlocking puzzle pieces, which folks have done before I'm sure. It all goes back to the question of how to print a large, continuous container that's larger than your print volume..

Not such a problem. Imagine your Reprap is a 3x4x5 box. Extrude a 3x4 section from the 5x4 face. Make it 5 units long. You have just created an object the same size. You could have made it even longer.

What is the "Simplified Kiwi Mendel"?

@Richard, I've simplified the Mendel and am optimising it for components I can get in New Zealand. It now has less parts, uses less steel, and prints a higher proportion of itself. It is also significantly cheaper.

The circuit-mounting board does give a certain amount of extra rigidity to the frame. Do you get the same effect?

great idea, so what are you using for steppers (TIP Arrays?) and second, what is that thing that looks like a cord/belt?

The cord on the X axis is Esky helicopter belt. The Z axis is driven by 4.5mm ball-chain.

Axes motors are driven with EsayDriveV3 boards, the extruder mototr and heater by TIP122s on a Practical Arduino prototyping board.