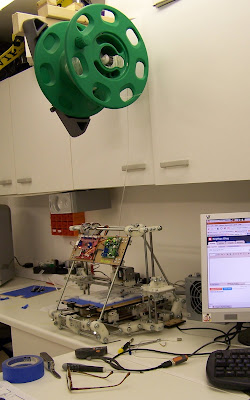 Now that the Java host software deals with RFO files (under Linux at least - see below), it is Pretty Simple* to run a machine in batch production mode making whole trays of parts.

[* Insert superstitious incantation to ward off the Gods' reaction to hubris here.]

So, as some of you may have noticed, I've put a full set of Mendel printed parts up on Ebay. I reckon that they cost me about £40 to make (including my time, which I'd like to imagine is more expensive than it really is). I was aware that scarcity would push the bidding up beyond £40, so I will split the difference and put half into the project's funds where the donations and Google advertising currently go. The other half will go to - errr - me :-)

Following this one-off experiment, what I plan to do is this. The Mendels at Bath University will also shortly start churning out sets of parts too, and those will all go on Ebay when they become available with a buy-it-now price of £40. I want at-cost parts to be available right from the start, though I realise that they will be snapped up almost as soon as they go up for sale. At least everyone gets an equal chance. I won't pre-announce availability, so people will have to watch Ebay to get them. I think this is fairest.

In addition, my wife, daughter and I will use our home machine (and it's decendents) to make and to sell sets at the market price (i.e. whatever they fetch in open auction) with a reserve of their cost-price to us (at the moment that £40). I look forward with interest to seeing what happens to the bidding when the passing blip of a buy-it-now momentarily comes into existence then vanishes...


Unusually for a profit-making enterprise, though, we hereby encourage everyone else to auction their sets of reprapped Mendel parts too. As you will be able to see from the Ebay link above, there is some dosh to be made.

Let's all spread RepRap and all make some money doing it.

If anyone can tell me where my RFO Java code is going wrong on Windows, I'd be very grateful. My problem is that I don't have a Windows system at home upon which to experiment. This, added to the fact that it works fine in Linux, makes debugging problematic...

Oh - the plastic-filament-holding reel in the picture is an old one for a garden hose. Simple; cheap; seems to work very well...

Comments:
wow £250 already, its amazing how much people are willing to pay for those parts. Of course people buying the first set of parts are also contributing towards the community and the profits will be put towards making new machines to print more parts and driving the cost down.

Absolutely. And I wanted to be completely up-front in the auction about how much they actually cost me to make.

I hope that this will encourage others to put up sets of printed parts, when they see the demand.

How long does it take to print a set of parts from RFO files?

A suggestion for future eBay lots - how about including an assembly manual and BoM, so that the lucky winner has all the info they need to get the remaining parts and put it together?

This is a great idea, I've been wanting to get people RepRapping at my Uni, but sourcing the plastic parts has been holding me back. Hopefully I'll be able to get mine up and running and do the same.

Converting the RFOs to GCodes (which only needs to be done once no matter how many sets you want to print, of course) takes just over a day.

The total printing time for a complete set is two days.

The assembly manual and BoM are here:

The RFO/Windows bug has been found and fixed. I've done another release with the fix in, and also containing Rhys's work getting the software to support the Mac.

It takes a day to generate the gcode? I hope there's some horribly inefficient code in there that's easy to optimize.

Unless I'm missing some important detail it shouldn't take more than a few seconds, maybe minutes, I'm not familiar with gcode for printing but somewhat for milling.