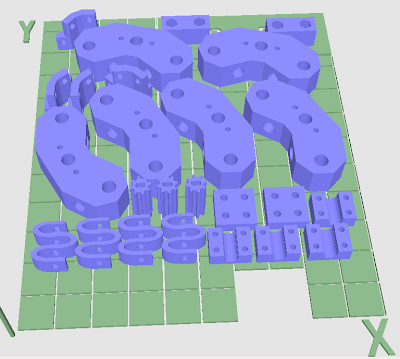 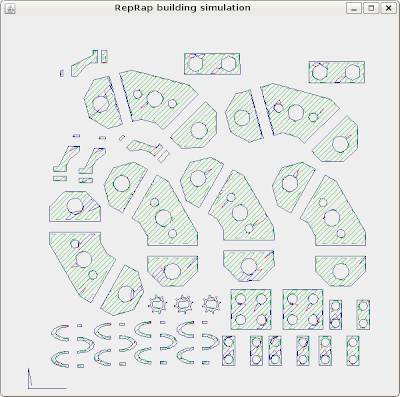 Comments:
sounds like you have been a busy body, though i am looking forard to your other updates, i do think there are some more things that will need to be done in time though.

Wow! A few hours for a whole print surface full of parts! Wonderful! I always understood that the grid approach was going to be massively memory inefficient and probably CPU inefficient as well. It seemed to me, though, that given an environment where DRAM was dirt cheap and CPUs were subject to Moore's Law that code simplicity and maintainability might be the most desirable goal.

Adrian, are you going to have an option in your new code to output gcode files so that we can use it for SD chip systems like Rapman?

Nice work! I'm looking forward to reading through the code - hopefully I'll eventually be in a position to contribute something useful!

It outputs nothing but G-Codes...

But be careful - for example, unless you turn the function off (see the preferences file) it will output accelerated moves; it will also treat the extrudate as another dimension - in short all the cool things that Mendel does with G-Codes, but that I don't think MakerBot and Bits From Bytes understand yet. But - as I say - you can turn all that off.

How does the speed of this software compare to repsnapper? I have just played around with repsnapper a little, and I would suspect that it process that whole build platform in less than 2 minutes. Am I wrong?