Metal bits from a RepRap

OK, so as always I cheat a bit. I used the ancient art of lost-wax casting, substituting PLA for wax. It burns/vapourises away cleanly at low temperature and is relatively benign stuff. So, how do you go about turning your PLA RepRap output into metal?

I took one standard-issue Mighty Reprap Power Ring in PLA as a test subject, and stuck on a few bits of 3mm PLA where I thought it looked useful. At the highest point, I stuck a simple printed cone of PLA to act as a filling hole. Then I painted it with thinnish plaster of Paris mix. While that dried off a bit, I mixed up more plaster and snipped into it about 30cc of uncompressed household fibreglass insulation. They only need to be about 5mm long, and are mixed in to disperse as well as you can. This will help stop the mould cracking (or, more to the point, hold it together if it does). This stiff mix is packed smoothly around the object, taking great care to not trap air bubbles like I did. 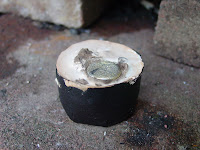 I wrapped masking tape around the bottom of a jar (initially sticky-side out) to make a disposable paper casing for our test subject. It looks black in the photo 'cos it's well-baked. Then, a couple more spoonfuls of plaster bedded said plastered bundle into place in this little paper pot. The pot was dried overnight in a desiccator, then baked at 150C for 15mins to drive off moisture. Next, the pot was inverted over a wire stand and foil drip-tray - out of deference for me not being in trouble for mucking up the oven. The temperature was raised to a scientific "11", and stayed that way until the conical filler hole looked absolutely clean, though slightly browned.

During that time, I fired up the ol' furnace (renewable fuels, etc.) and melted a load of pewter. With the mould still really hot (and thus safely dry) I poured in the pewter and left it for a 1/2 hr or so to cool off gently. I definitely did not impatiently have-to with a can of "Freeze Spray." 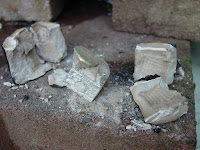 With the aid of tongs, the flat side of a 160g pein hammer was strategically deployed multiple times (Adrian will remember my skill with this tool from an earlier occasion) to reveal an amazingly faithful reproduction of the ring. The pegs sticking up are where pewter got into the vent holes. You want this to happen - just trim the excess off and file down. Same goes for the filler hole, just pop the scraps back into the clearly-labelled "Scrap Pewter" box. 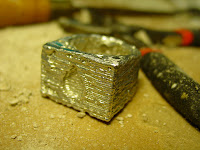 After a stiff brushing under hot water, I was allowed in the house - no, I mean the ring was cleaned up and presentable. An air bubble was trapped inside the ring, resulting in a blister of pewter. But pewter is soft stuff, and you can easily correct problems like that with woodworking tools and a file.

If you do all this, do take basic safety precautions. Also be wary of using metals that melt at a higher temperature like aluminium. They cause plaster of Paris to decompose in undesirable ways and you need to research it properly.

I copied the blog entry into:
http://objects.reprap.org/wiki/Casting
and we'll have to get it into tutorial format some day.

Thanks, Sebastian. Good to see someone collating this information.

Would this work with using ceramics instead of plaster of paris? Of course, instead of the oven you'd use a kiln (furnace should work, though the flame can't go near the ceramics)

Rather than go through the two-stage lost wax process and burn up a load of plastic, mightn't it be possible for the RepRap to extrude the casting mould directly? I imagine one would have to formulate some kind of fine, air or heat setting extrudable green sand for the process (possibly sugar based, like the stuff used as reusable mortar in some building construction sets I've seen?). Wasn't somebody experimenting with a paste extruder head a while back?

This should work with other ceramics. I believe silica flour is used as the first coat these days.

I could have gone to the trouble of building a paste extruder, but this lets me tidy the artefact before moulding and I could do it reasonably quickly with stock kit.

>mightn't it be possible for the RepRap to extrude the casting mould directly?

Some formulations of silicone rubber can stand the heat of some pewter alloys. That would also allow for the design of an articulated, re-usable mold.

A very nice example, rather than using the lost wax method you could just make a rubber mould from the printed part.
A great way to make bespoke parts like extruder drive gears or even as you have done bespoke Jewlery in various low meltng point metals.

A carefully-designed positive (or matching set of them) might be cast into plaster of Paris (or green sand, for higher-melting alloys) several times, so that several disposable molds are made from a single print.

Also, I was under the impression that Al-Si alloys (as from scraps of engine block) melt low enough that gypsum does not decompose. Was I mistaken there?

Has anyone considered (or tried) using wax wire that is supplied on spools for dental and jewelery casting work? An example of the material is at http://www.jewelerstoystore.com/Wax_Wire_Spool_p/w66-116.htm