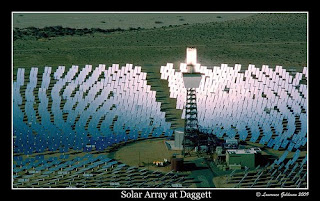 We've discussed reprapping solar panels for a long time, and - of course - our semi-conductor printing capability isn't quite up to that yet.

But it should be possible to reprap a small-scale solar array like a miniature version of the industrial one at Daggett above.

It would use reprapable solar-powered steerable mirrors. Those would be an autonomous motorized gimbal mirror support with a tracker that keeps the sun's reflection pointing the same way at all times (onto a solar boiler, say). The idea is you'd reprap out a load of these, then walk round a field putting them down. They'd all align themselves and start delivering solar power...

I think the trick is to black out a corner of the mirror except for a small circular spot in the middle of the black. Each steerable mirror has a detector on a flexible arm that you place where you want the reflection of that spot to be. Feedback keeps the spot-reflection on station, and hence the main mirror also on station. A really clever design would combine the spot detector with the local solar cell that provides the motor and controller power.

I look forward to the first version on Thingiverse...

i was thinking about DIY-solar-energy some time too ...

My favorized koncept will use outweared satellite dishes, covered with small mirrors and a bunch of Seebeck-wirepairs with the 'hot' ends in the focus and the other 'cold' ends behind the dish in the shadow.

I tried with a 1,2m-dish and some ten circular mirrors - in result you can rougly multiply the reflected energy of one mirror with the total count of mirrors, so e.g. with 100 mirrors á 4cm in diameter you will concentrate the sunlight nearly 70- to 90-fold.

It could be enough to heat a black hull around the Seebeck-elements up to some hundred centigrades with the 'cold' end at maybe 30 to 40 centigrades.

The major point in this design is the reusability of old satellite-dishes and mirrors.

For the Seebeck-wire-elements you need wires of two different materials with a good electropotential difference and a DIY spot-welder made from high-capacity condensators ...

I especially like the idea of creating parameterised fixtures (3D printed) for bigger mirrors.

And there are already (open source) mechanisms for tracking the sunlight that scale up very well:
http://open-innovation-projects.org/projects/show/94/solar-tracking

The people at FactorEFarm.org are building a designing and building open source solar concentrator:
http://openfarmtech.org/weblog/
They also have a full Darwin set printed out by nophead, though they seem to have stopped working on their RepRap entirely. :S

Has one ever developed biosolar Hydrogen or other fuel production for subsequent mechanical rotor to electric conversion in enclosed, transparent panels? I hear NREL has considered... It might be more complicated, but it would be interesting if even 1-5Kwhs could be made this way.

It seems to me that one of the big advantages of reprap is its ability to produce parts that follow a carefully specified curve. Flat mirrors are pretty common, but shapes like parabolas and ellipses can be a pain to produce in a small workshop, and compound curves can be even more challenging. If someone were to design a solar collector of the correct shape to keep the heated element at or near the focus with, say, a few (possibly manual) adjustments per day instead of actively tracking the sun, a reprap machine could add a lot of value by producing the struts that gave the reflector its shape, and the solar rig could be pretty simple mechanically and electronically.

If you will go to your library and look up...

... I think you will find some very interesting kinematics for running a solar field which should be very reprappable. I had the one machined back in the early 1970's when I was in graduate school.

If you could, could you scan a copy of the article and send it to me. I've been trying to get a copy through interlibrary load for months now with no luck. Universities have been dumping their old paper journal archives over here without scanning them. It's a scandal.

Also, a recent article that references it:

Wow! $31 for a couple of pages out of an old journal. My Scots-Irish soul is outraged.

the first of its kind. linear and steam. i wonder if this could this be reprapped at a mini scale with the water pipes that each household uses and installed in backyards/ rooftops...

A small reprapped Fresnel-type array would be a fun starting point.

Rhys Jones in Adrian's lab was incredibly kind and got me a PDF of the article. If anybody else wants a copy yell and I'll send one across. Francia was an incredibly brilliant guy. He ran his solar field with a weight powered pendulum clock.

I'll take one. I also found some pdfs of Italian Solar Energy, and has some history on Francia, with pictures of the honeycombs. i'll see if i can get an email listed on my profile

I like Vik's idea of reprapping a fresnel lens. I bet PLA is pretty IR transparent, and - of course - at IR wavelengths the repraped lumpiness probably wouldn't matter overmuch.

But the sun's gone away for a few months up here. Vik - it should be arriving down there at you and Ed any time now. Wanna give it a go and see if you can set fire to some stuff? You can always call your colleagues to put it out again :-)

Talking of reprapping a fresnel lens, why are satellite TV dishes not flat? Seems a real waste making them a difficult shape, when an injection-moulded flat fresnel parabola would work just as well (not to mention being easier to pack ten-deep in a box).

what about repraped glass, is that posible?

i read somewhere aluminum instead of glass could work, but not sure how much would be needed nor if it's cost effective.

other project of renewable energy (http://www.shpegs.org/), may be something in a small scale?

I'm down at Vik's lattitude here in australia and have plenty of spare time due to a FiFo work system. I'll have a go at any good designs that pop up. I don't have PLA, but for mechanical tests I'll be good.

Adrian: I think Vik was talking about a Fresnel mirror array, as seen in the Kimberlina article linked above. Presumably with polished or factory-flat surfaces, but a reprapped movement.

Lumpiness of a millimeter or so would need to be viewed in teraherz or microwave radiation in order not to matter.

Sattelite dishes have the opposite problem: oscillation is slow enough that lenses hardly work, because the refractive index of most anything transparent resembles air or vacuum quite closely. A Fresnel mirror arrangement, though, would probably work.

Adrian, fresnel sat dishes are inefficient compared to parabolics at >2cm wavelength and more expensive. Offset parabolics aren't a difficult shape to CNC a die stamp for, because the toolpaths are arcs.....

The difference seems to propose whether it's more efficient to use parabolic dishes to mirror light (and heat) on one (or at few, equidistant) extremely hot point(s) on the linear steam pipe or (with stopcocks? to regulate heat transport), or, to reflect many linear rays from each flat mirror and heat the entire length of the steam pipe simultaneously and with equalized intensity.

many *wide (and parallel) rays, not linear (perpendicular) to the steam pipe

Hey, wow, this would work, and be cheaper, long term tech

my thoughts are these:

First off, why waste money and time on adjustments, when light can be bounced around, the less moving parts something has, the less likely it is to break

additionally, simplicity of design and usage would be the key to this technology, so, design a modular unit which you aim at a point once, then it collects energy from all 360 degrees, requiring no moving parts, and is easily used by the average person

That being said, we'd need: cheap materials which reflect well, and two stand alone designs: the collector, and the point to be heated and used for power generation

simple is better, because if we ca get this into the hands of the average citizen with almost no start up cost, we succeed at the goal

we don't need to print power cells, we can print small scale generators, so no need for new materials, just good design