My old Darwin in my home workshop has just finished printing me my personal set of Mendel parts: 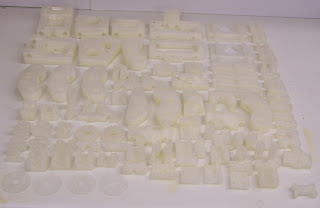 Like any proud parent, it was uncomplaining about the chore, even though - for all it knows - it is printing its own replacement.

(I fact I shall keep the old machine so I can double my production rate; and besides it has tremendous sentimental value.)

It's taken me a relaxed couple of weeks, just queuing up prints between experiments, and not leaving the machine running while I was at work. I'm sure it would be OK, but I'm not 100% certain what the insurance company would say in the unlikely event of being confronted by a smoking ruin:

IC: What are all those chemicals in that charred cupboard?

AB: Oh, fertilizer, weedkiller - I do a lot of experiments on plants; various volatile organic solvents. But they weren't the cause.

AB: No - I have a self-reproducing machine, and I left it running while...

AB: Yes, but it's quite safe. It can't reproduce without human assistance, and...

IC: But you left a self-reproducing machine running on its own?

Anyway, now off to hack the documentation as I build...

Comments:
When I really need to get out of the house during a long print, I tweet the live video stream and have friends call me when something goes wrong. I do have to give them access to a RED button that will turn off all power or something similar.

And the geek shall inherit the Earth...

This is maybe what you need, Adriaan. :-)

I want to make an open source version of this with manipulators.

Very nice. What if you ran your machine on the concrete floor with a with a steel drum placed over it. Fireproof?

Still waiting to see a reprap family tree on the site. Call it iso 9001 if you want, I just want to see it grow.

Yes, according to this wonderful video Spykee is better than the Rovio:
http://www.youtube.com/watch?v=_gtPtKZSckc&feature=channel

But on a more serious note: these are really cool robots. Having open source addons (printable attachments) arduino-interfaces, etc. and/or fully open source robotics kits, that would be awesome. And it seems like it should be able to push the off switch on my RepRap should something go wrong.

I've thought about taking an off the shelf fire alarm, and adding a relay (and probably some other simple electronics) to make a system that cuts power to the whole machine when smoke is detected.

Yes I've thought of something like that. Cheaper than a robot sentry (but perhaps not quite as geeky). I was thinking of an arduino to detect the beeping and cutting power, but this seems less error prone.

A visual smoke detector could be made with an LED, a mirror and a photo-detector. But then again, they're not the most expensive. When many people have RepRaps, making the software prevent problems could be important too. Such as turning off everything that's not needed. Also adding (auto-resetting) fuses with sensible values could help. This could be as simple as a PTC on a light application.

I'm thinking that a webcam with a simple image processor attached is probably best. If the image that the webcam is looking at changes by less than a certain amount every 30 seconds then the machine stops. It would mean that when there is a communications crash and the machine just stops in place then it wouldn't just keep pumping plastic with the heater on.

I am thinking that the Insurance Company is the least of your worries. The Police may be inclined to disbelieve that you had the chemicals for anything other than terrorist offenses.

>I do a lot of experiments on plants; various volatile organic solvents.

Ah! Is there a link I can follow to read about that effort of yours?

>What if you ran your machine on the concrete floor with a with a steel drum placed over it. Fireproof?

An enclosure made of gypsum would probably be a lot more convenient and cost-effective. In a fire, gypsum absorbs heat about twice as well as water does, which is no mean feat in itself, while releasing water vapor.

You would need some way to allow heat out of the enclosure, though.

It would be nice if In addition to the thermistor, the electronics included a thermal fuse (http://en.wikipedia.org/wiki/Thermal_cutoff) to provide better saftey in failure situations.

I think that the simplest solution would be a smoke detector that trips the mains switch...

... but then maybe your reprap (and all around) is burning anyway ... so you should think about a sprinkler system or such ;-)

How about keeping your reprap outside in a shed in the garden, that way if things go bad you don't burn the house down, also might be better for ventilation?

Reading this I think the Solar powerd shed is now going to have an aditonal gyprock cell for the Dawin/Mendel machine I had not thought of it as a possible fire risk.. but running over night I think might be a common need.. If I rember right you need at least two layers of 1/2" Gyprock arround an RSJ for fire protection. It will also help maintain a constant temprature to extrude in..

With a bit of thought I believe there's no reason why leaving your reprap going should be more dangerous than leaving your oven on. Perhaps a thermal fuse like these http://www.cantherm.com/products/thermal_fuses/sdj1.html should be added to the heater block. Its cheap and available, used in heaters, toasters, irons etc.

Typically in firefighting you remove either oxygen, fuel or heat (or actually you might try to remove each of them).

@ Giles: Reducing collateral damage by using a dedicated "Make Shed" might still be quite a loss. :)

Erik, I agree detecting failure is a better solution, whether it be by webcam, smoke detector, or thermal fuse.

Since I do not own a reprap (yet) I don't really know what modes of failure are possible.

I imagine that possible modes of failure are

1) tempreture sensor failure, the sensor could report that the extruder is less hot than it is and get too hot. its an unlikely mode of failure since I think when a thermistor breaks down, its resistance becomes infinite reporting too hot rather than too cold.

Thermistor failure detection could be added to firmware. By checking if the output is realistic. Eg, has is made huge jumps in temperature, has the output gone to the max or min, has the output remained unchanged for an unnaturally long period of time while forcing a change by changing the set point by 1 degree every so often. This can be implemented at no hardware cost.

Also a second thermistor could be added and the sanity check would involve comparing the 2 values, realistically there shouldn't be much of a change between the 2 readings. But ultimately an independent system would be ideal as software checks wont protect against a cpu / firmware failure. A thermal fuse is a simple independent system but will only protect against overheating of the system it is in contact with.

I'd like something that cut the power and dropped a litre or two of gravity-fed water spray on top for good measure.

I guess I don't see what the bother is. All you need is feedback on filament feed that detects when you stop feeding filament and shuts down the extruder heater. Aside from that, what's to burn?

>Aside from that, what's to burn?

There are no fuses in the RepRap system and the wire used is not rated to carry the current a PC PSU can deliver so potentially any of the wiring, and possible some PCB tracks.