I'm an architect by training with a keen interest in the history of building technology. In the Middle Ages, architects compensated for the lateral thrust generated by domes and vaults with butresses. In the 20th century architects dealt with inflatable buildings by using guy wires to anchor them to the ground.

I spent a lot of time working with HDPE several years ago. HDPE has terrible tendency to curl at the edges. At that time, I thought it would be a good idea to print pads next to the ends of a long printed object and guy the ends down. This spreads the force generated by the upwardly curling printed object. You can see a first effort at this here. 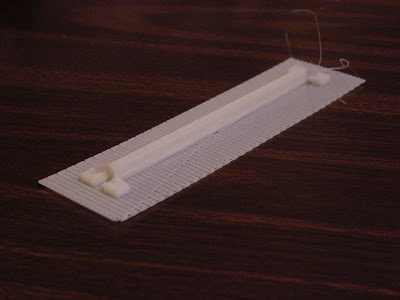 I was trying to print a beam 150 mm long by 5 mm wide by 10 mm high. You can see the details of the pads that spread the tension force and the plates that carry that force down and spread it onto the raft in this closeup. 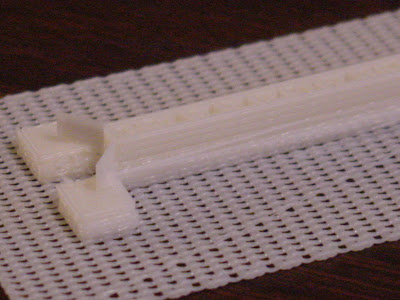 The idea worked, so I increased the height of the beam to 20 mm and tried it again. 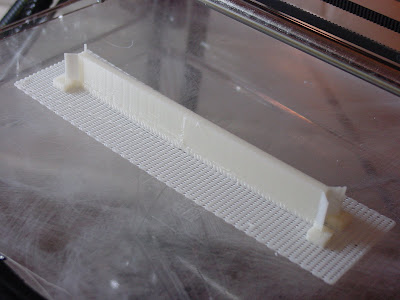 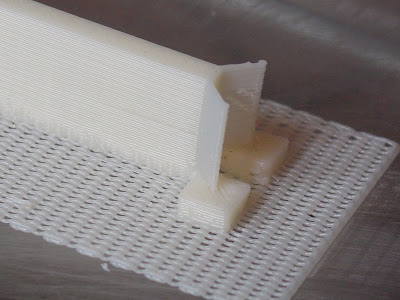 After I removed the beam I noticed that the curling force during printing had actually bent the rather flimsy 3 mm acrylic printing plate provided with the Rapman printer. The downward bowing amounted to 2 mm over the 150 mm length of the beam.

It seems likely that if I use a thicker acrylic printing plate that I can reduce the 2 mm bowing on the bottom surface of the beam. I will see if I can purchase a heavier print plate tomorrow at the hardware stockist's.

I will also measure the bowing of the beam over the next several days to see how much it ultimately distorts.
Wednesday morning: I measured the bowing again a few minutes ago. It is still 2 mm.
# posted by Forrest Higgs @ 8:18 AM

Comments:
They also have a 8mm thick printing bed for 21.95 GBP:

That's really fascinating work with a reasonable scientific approach! I like to hear more about your work!

kiraly: I can get the acrylic at the local hardware store and make my own for about US$10. :-)

This is a great experiment, keep it coming. One approach worth looking at on thingiverse is a lattice-based bottom:

Forrest, I started using a 1/4" acrylic base, bolted flush to a 1/2" MDF bed with 12 bolts, and increased the density of my rafts and the decreased the initial layer height to increase the part adhesion to the base.

Using that setup, I could keep warping of ABS to a minimum, but the parts were so well attached that I often shattered the acrylic base trying to remove the parts with a hammer and chisel. Also, larger parts like corner blocks and the X carriage tended to develop horizontal cracks a few cm up due to the internal stresses.

PLA, with it's lower glass transition temp, seems to be a lot easier to build with in the long run. PLA will still warp though, if I build a larger object in lower ambient temperatures with the cooling fan running.

All of this seems to point towards a slightly heated build envelope.

Correct, as a matter of fact Stratasys machines use a 70c heated envelope, combined with a 280c liquifier temp.

there is much to be gleaned from the stratasys patent filings: these waters are not uncharted :)