Will RepRap work in space? We did an airmile whipround but didn't have quite enough for one of those fancy parabolic flights. So we took the Russian approach and just flipped Mendel instead...

Here's a photo of prints of the same object file in positive and negative g. I would say which one is which but we muddled the order and honestly can't tell the difference. 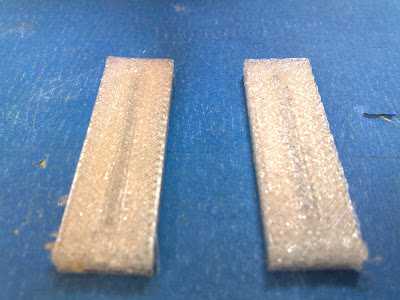 So it can print in positive and negative g, I guess zero will just be middle ground?

It certainly would take care of the need for support material! :-)

Not really, you still need to extrude against something, not into fresh air (or vacuum for that matter).

Do you know if there would be any effects of printing while in motion (ie on a ship at sea, on a plane, on a train, etc)?

I'd wonder if we could print at 90 degrees off horizontal.

Great work everyone. Apart from some minor heat adjustments(no convection in space means fans would need to be on all the time) it would probably work on the ISS today (sigh, if only it didn't take half a decade to get equipment up there)

Well, if the ISS don't want it we could try the Chinese.

Looks like the Chinese are taking up Reprap on their own. :-)

but thats pretty cool, if they did get a reprap on the iss i think that would mean allot for the who project in general. would be a great way to get the project going in the main stream

"Call the NASA guys..."
They already did this with a Stratasys FDM 2000. Upside down but also in zero-G! And it works almost the same :)

I posted about this a while ago:
We all have our mental models of what would happen when you produce an object with overhangs without supports. If we explain it to people, we often say, material that's not supported, will fall down. This is not accurate. The effects of gravity are mostly insignificant. Some time ago, I'd tilted my RepRap less than 30 degrees, but I saw no real difference in the fabrication of a horizontal hole in a structure. I didn't want to put the entire machine on it's side or upside down. Luckily for us, NASA has done exactly that, and as a bonus also did many Zero-G tests!
http://reprap.erikdebruijn.nl/files/research/NASA%20as%20user%20innovator%20-%20WPMicrogravityFDM.pdf


We can probably learn a lot from this. It clearly illustrates that surface tension is a much stronger force when compared to gravity, at least at this small scale.

Of course, since we don't have a heated build chamber, it possible to let a thread of extrudate to solidify more quickly if we stretch it enough (high surface to volume ratio).

If at some point we would deviate from a layer-by-layer construction method, this would allow us to print on the side of an object after printing a main column. We can then have unlimited overhangs etc. The down side is that the complexity of the process increases a lot. Similar to CNC milling, design possibilities will start to depend on what the toolhead can reach.

From my topic: "Effects of gravity on FDM/FFF on overhangs, bridges and cantilevers"
http://dev.forums.reprap.org/read.php?14,27036

If you'd want to test it in parabolic flight, check for (technical) universities with their own aircraft. I know that Delft University of Technology has their own Citation (actually also partially owned by the NLR though) which they use for, among other things, zero-G experiments.
I guess there has to be at least one university in the UK with a similar arrangement...

The paper I mentioned is about FDM parabolic flights (zero-G or, more accurately, "microgravity") by NASA.

FDM is quite independent of gravity. It's not even very hard to extrude in mid-air, but it will not be reliable when forces are put on it. Adding plastics drags and shears structures that not rigid enough.

FDM is particularly well suited for space usage. Much more than powder based approaches. Recycling would mean that they could even reduce the mission payload by using limited material and recreating tools on demand while recycling tools not needed at that moment.

There is a problem with Bath University getting anything on the ISS and it is political: The UK does not contribute to the ESA manned spaceflight budget. UK Astronauts even have to change nationality before flying.

Wow, so there's a good chance that I can mount Mendel on my wall? Although I suspect as the material cools, it may sag.

Could a RepRap printer be built with a self propelled mobel robot platform, so that it can print something in one place and move to the next place to start printing again