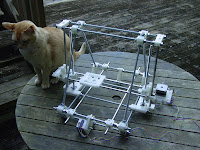 Well, you've seen the nice diagram from Ed so here's what the framework looks like when you put it all together. One change becomes immediately apparent - there is no longer room for a cat to hide inside or under it. Things seem to basically fit, though it might be an idea to wrap tape or plastic shim around the Y bars to ensure they're gripped firmly.

There is a little flexion at the top of the assembly. It is possible that with the right speed of head movement at the right height we could get some vibrations building up, however I have not fitted the board holder or the Z axis guides, which may well add more rigidity.

The extruder holder is a simplistic design, basically because there are not enough 625 bearings in my part of NZ to build a Mendel (Gary just cleaned out the local supplier!). I found PLA on silver steel slides just beautifully, so I'll be using that approach for the prototyping. For the vertical guides I'll probably just push some CAPA in for the moment.

So, now comes the tricky bits - saddles, gears, pulleys etc. This prototype will probably experiment with 3 types of belt drive - 4.5mm ball-chain as successfully used on Darwins for the Z, E-Sky EK1-0503 model helicopter belt (sadly not quite long enough for the proposed X axis) on the Y, and if I can print gears for the 3.5mm ball-chain that'll go on the X axis. If not I'll install the standard Darwin X belt.

Comments:
So how much plastic is in it, do you think?

We're looking at about the same total volume as a Darwin, but the Z axis components are way bigger than anything Darwin had. They're 145mm long, which I think might be outside the build envelope of a MakerBot. They only just fit in my Darwin if I fold the fan away.

This is completely unrelated to the post, but the blog seems to be missing the "previous posts" "next posts" buttons at the bottom. Clicking through the monthly archives on the left isn't very convenient.

Really can't find 625 bearings?
There is a couple of businesses in Auckland that deal with bearings, will look for them when I get home.
Its a bit difficult right now on my mobile phone

Just inquired, Saeco Bearings in New Lynn have both 608 and 625 sealed bearings in stock

"We're looking at about the same total volume as a Darwin"

I guess I'm baffled then. If it is going to take as long to print parts for a Mendel as it did a Darwin what did we gain?

@Forrest - my guess would be, looking at the picture, far less metal to buy, and possibly an easier construction?

Might also be easier to get to line up properly, or more tolerant of being slightly off - the cube version tends to be exceedingly picky about its alignment.

Forrest, it's just so much simpler to put together than a Darwin. Far, far fewer nuts & bolts, cheaper motors, and it actually fits on a desktop with room to put a screen and keyboard. The higher relative percentage of plastic quietens some of those critics who say "it doesn't make enough of itself."

It uses a lot less smooth steel - people find that hard to get compared to threaded rod in this day and age. I think it's a huge step in the right direction.

That said, it's still using steppers. The multi-head mechanism is also still very much in development. But I need feedback on how it basically functions, and I can't wait for multiple heads and DC servos on the axes. Hopefully, by the time I've done that someone has a DC servo ready. If not, I've got something new to do for the next few months.

Thanks for the list Vik, s'good to know the design refelects inital concepts. Also, to add, critically the wedge does not suffer from over-constraint, which was an inherent problem with the Darwin z-axis configuration. Ian solved this with correct use of bearings and laser-cut parts, but for poorer quality RP parts this made replication a tad dicey.

Okay, but we can still expect the replication time for Mendel variants to be about the same as for Darwin. :-(

Yes the thing that limits the spread of Darwins isn't the cost of the rods, or the time to assemble it. It is the time and effort taken to make the parts.

The consequence is that there are far more inovative people in the world trying to work out how to avoid the RP parts and use off the shelf hardware than there are people designing new RP parts to evolve the RepRap machine.

Your choice of mounting the mobo and controller on the vertical rails will most likely eliminate more vibrations than the completed base will, defiantly stick with the idea.

One suggestion I can make is the Z axis is running up a piece of rod but the top is able to flop around, if you assemble the gantry out of square it will lead to small binding and eventually kill those poor nema14's I recommend making the carriage & screw holders out of one solid piece or 2 that butt together.

Only other suggestion is Ried Industrial supply ships worldwide and I would recommend a $12 piece of acme leadscrew for better vertical accuracy.

> They're 145mm long, which I think might be outside the build envelope of a MakerBot.

We're going to do a split version of those parts for MakerBotters.

> Yes the thing that limits the spread of Darwins isn't the cost of the rods, or the time to assemble it. It is the time and effort taken to make the parts.

I disagree. I'd say all the factors mentioned there (and others) are fairly equally important: to pin it on one thing is a bit simplistic. The Wedge addresses a lot of the issues, specifically assembly and volumes.

With respect to the single issue of part manufacture effort my suggestions would be:

1) A one shot build (printing in a larger area)
2) Fewer parts - tough with cartesian. At the end of the day a 3d positioning system needs quite a few parts, that's difficult to escape. However, when we start using a support material head this will reduce part count significantly... Also, polar has the potential to radically reduce the count but suffers from accuracy issues at extremes (oh no, here we go with the polar debate again ;-)

I wonder if anybody did a proper quantity survey of Darwin parts and set up a pie chart so that we could visualise get a grip on what we could reduce for greatest effect? :-)

Ed did a parts count and analysis in his thesis.

I've built a simpler X carriage in one piece from PLA, Z rail guides from CAPA, and a far simpler Y bed assembly using rubber tube to adapt the PLA pads precisely onto the Y guide rods - and level the bed. More later :)