Battle of The Bulge pt2 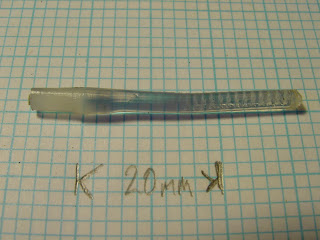 For those interested, here's what can happen when you use 10mm PTFE rod for your extruder insulator with plastics that melt at a higher temperature than the original CAPA. This image shows a 3mm PLA filament extracted after a jam - the PTFE insulator is now useless. The ridges on the right are from where the thread of the screw drive forces the filament in. You can see that it fades out towards the centre indicating that at this point in the PTFE, the filament is just becoming plastic enough to conform to the walls. Only the cloudy last 6mm of the rod on the left were in the heater barrel itself, and they are only cloudy because I stress-fractured the rod at that point to get it out. 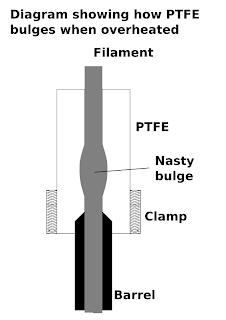 You can clearly see that a significant bulge is forming in the PTFE shortly before this, expanding the filament to nearly 4mm diameter. The PLA has very little plasticity at this point and so effectively plugs itself into any developing bulge and forces it open wider. This is why the PTFE barrel is now scrap, and may explain why some users are finding that their extruder has inexplicably developed a tendency to jam solid. This extruder had always been operated with a tight hose-clamp over the join between the PTFE insulator and the heater barrel proper.

I'm reaming out the extruder clamp/base to 16mm to take the recommended, stouter PTFE insulator that I machined up on the old new lathe (or is that new old lathe) at the Wellington MakerSpace last week. The insulator's in the suitcase somewhere...

Comments:
The PTFE does get soft when hot. I'm wondering if it needs some extra support.

I'm thinking about using 6 or 8mm PTFE rod to create a smooth channel, and then using a PEEK or stainless m8/m10 outer to provide support - e.g. using the PTFE as a liner.

I've had a number of extruders get stuck - and it often is because of softening or melting further up the insulator.

If you'll notice, Adrian and many others put a metal sleeve around their PTFE for just the reason you've described.

It's also the reason that I use a much bulkier 1" block of PTFE rather than a rod in my extruder. I found the cube, which was more expensive, much easier to drill and incorporate into my extruder design than the rod.

Forrest, I use a wide hose clamp for the metal sleeve. The added compression also helps it seal onto the threaded heater barrel. Sadly it looks like I made the threaded hole in the PTFE too deep, so I'll have to dismantle the thing, shave 2mm off the end and re-assemble it again.

Wiser this time - I left enough play in the thermocouple and heater wires before clipping them to the extruder body! Might get it done while the girls are at the Food Show today.

In parallel with this I'm getting the Tamiya extruder configured on Child/Phoenix. I'll use a thermistor for now but plan to add a thermocouple when Simon has done his take on the indigenous extruder driver board.

Has anyone tried lining the inside of the PTFE with a metal sleeve before?

It could be thin and not span the length of the PTFE to avoid thermal conductivity.

I'm doing it with a thin metal tube and no PTFE as an experiment...

Was there any visible swelling on the outside?