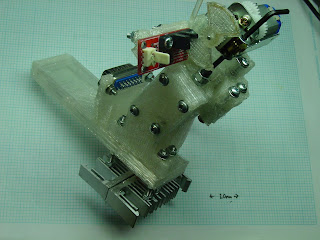 Looks good. How did you find modeling in BRL-CAD?

Modelling in BRL-CAD was easier than Blender, harder than AoI. It's got a GUI which seems to have very little ergonomic selection capability, and a unixy command line interface that is exceptionally powerful. It also comes with a series of manuals that explain to a reasonably sober GI how to operate it.

There is no real-time shaded interface that I've found - you have to keep on telling it to raytrace. On the plus side, it you're using a multiple screen desktop it is much easier to navigate, and it seems to get boolean operations right most of the time. When it can't, it tells you so and points out exactly which parts don't match up allowing you to fiddle them by a few microns to solve the problem. Only had to do that once.

It can import STL files, so you can import an AoI-generated STL and use that as a template to get all your holes etc. in the right place for a new model or add-on.

Thanks for that. I will have to put it on my ever increasing list of things to learn.

I have just got up to speed with Kicad and will certainly be using it for all my home ECAD projects from now on.

Kicad is good I ditched eagle for it some time ago. Then found some PIC libraries I had donated to eagle turned up as Kicad libraries.

Yes there seems to be an Eagle to Kicad library converter somewhere.

Looks great Vik! I like the opto spinner - plenty of resolution at that end of the gear train!

The shaft the spinner is on was a very fortuitous aspect of their design. The big problem was keeping the filament out of the spinner!

Which plastic have you used to make this with?

How easy would this extruder be to make without having the ability to print the parts?

Ive not tried any of the modern PCB design SW yet so Kicad will be the first one.
AOI Im makeing progres on thou Thanks guys

Tamiya also do a planetary gearbox kit with motor that I have fancied having a play with but have so far been unable to find a local model shop that stocks anything other than whole model kits rather than tamiyas other bits.

As is usual with these things I wanted to have a look at the real item before purchasing or commiting to ordering one up.

This one is printed all in PLA. I'm using the Ponoko lasercut extruder to do the printing - and it has also printed a set of corner brackets so I'm now very happy with the life of the Ponoko extruder. However, that's not speed regulated and eventually this one will be!

Your Tamiya stockist should be able to order them in for you. If not, then we have another availability problem. If you can find a more readily available suitable motor that I can also get in NZ then do let me know.

On a slight side note..

Take a rummage on t'internet searching for Steampunk and Jake Von Slat.

On his home pages he has done some interesting things with electro etching brass etc.

That as well as salt water electro etching could be a sound DIY route to making relatively high res Opto Encoder disks out of brass sheet (The sort that is available cost effectively from model shops).

I know you don't actualy need it for what you have done though.

Aha PLA I have yet to find some PLA listed any place.

You can spend a lot of time looking at this site though...

I'll look at the planetary gearbox if I can get one.

We have PLA stocks in NZ and Europe.

I did a Google seach I have many compaines litraly 10-15 mins walk away using the PLA film but nothing on welding rod :-(

We get it custom made.

3mm PLA: we have a good supply at Bath; I'm looking into organizing a sensible way of distributing it, in Europe at least. Of course I'll blog it if I succeed.

Electrochemical etching: we considered this a while ago for PCB production, too. I'm sure there's a blog post :-)

Imagine a reprapped head consisting of a matrix of wire electrodes like a dot-matrix printer, but not moving axially. Raster-scan the head over a blank PCB under an electrolyte, etching away the bits that you don't want by turning the pins on and off with MOSFETS...

If you do this from one end of the PCB to the other, it should be possible to organise it so that you never have an isolated electrically unconnected island that you need to remove (it's easy to prove this for a single electrode, but I haven't tried for a matrix).

The ideal electrolyte for removing copper is sodium chlorate rather than NaCl, I understand. Poisonous and explosive! Excellent...

The interesting thing is that Jake Von Slat was using copper sulphate as the electrolyte.

Depending on whether you make the piece an anode or a cathode it will strip or plate with copper.

Novel and a touch easier to get hold of (with out someone deciding you are making bombs) and arguably a touch safer. Not as easy to get hold of as common salt though.

Sodium chlorate solution can be made by the simple electrolysis of saturated brine with a healthy current - usually that means bunging 12V through it.