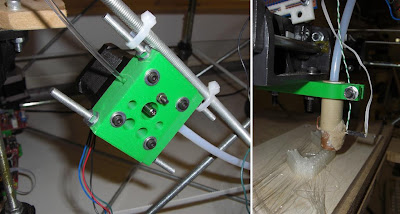 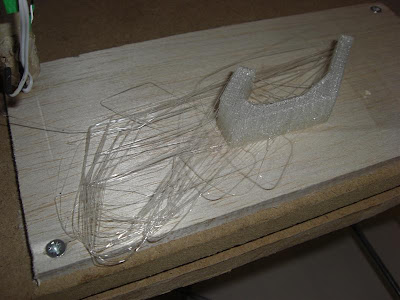 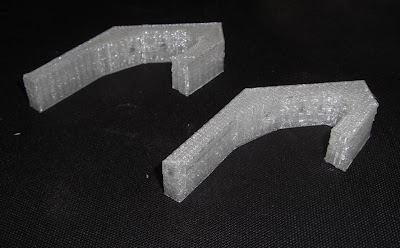 Could you tell us a little more about this PTFE tubing you're using> Adrian was recently kind enough to send me a sample of PTFE tubing for a eutectic extruder that I'm working on. It's about the right size from what you describe, but it appears that there is a huge friction coefficient in play when I try to run 3 mm filament through it.

Could you tell us more?

Really elegant design!
Stupid question: If the filament runs out and you feed a second filament into the tubing, will it be able to force the first filament through to the extruder head?

Forrest - Ta! I think Adrian sent you silicone tubing, not PTFE, which would have a really horrible co-efficient ;-)


Jay - Ta! Yeah we haven't tested that but from what I've seen it should be fine.

i wonder if you put a solenoid on the print head, to pinch the filament to stop it there, it might ad some wight but it might also help with making the printing cleaner. but overall i do like the idea, it dose have its good points.

Nice work! I have a question about the build process though:

Does the print head have to return to the origin after each layer for cooling purposes? I usually build solid objects like that in one continuous go, with much less starting and stopping of the head.

Which brings up another question - is that PLA, and where can I get some? :)

I think a better solution would be a strain sensor that measures force applied to the filament (e.g., attached to the PTFE), and backing the filament feed up until the strain in the tube (and, consequently, the melt pressure at the extruder head) goes down to some acceptable value.

Strain sensors are also cheaper & put out a more linear signal than thermocouples. It would complicate the software and one would need over-temperature control, but I could imagine running the heater control loop based on how easily polymer flows through the nozzle, as measured by the relaxation of feed force.

Wade: Looks like PLA to me. I've got some spools of it in NZ and some are going out to Europe. Freight is the killer.

Is there much diffrence in the friction between the different extrution plastics for example ABS?
Do you need to maintain a minimum bend radius for the tube to keep friction low?
Have you looked at what the minimum working lenght of tubing could be in view of the above ie could the tubing be in the shape of an inverted U?

Yes solenoid is an option (and has been tried), but if backing up the motor works then we're on to a winner. Adrian has whipped in some code to do this and we will test. Joel, idea on strain measurement is worth a look, nice.

Inter-layer homing is merely to guarantee accuracy. This is optional... obviously the trade off is stringy bits.

Test was for PLA only so far. This will be available through RepRap sources soon - we've just taken receipt of 70kg from NZ.

Have not tested for ABS. Will do when we have a dedicated rig set up. Friction element likely to be worse for ABS. Minimum bend radius for PLA can be ludricusly small, ~40mm will work fine! Therefore inverted U is no problem (and my intention for implementing on the wedge).

For those in the U.S. (Forrest, for example) - Mcmaster carries the same stuff (I feel like a broken record, this is the third time I've mentioned this XD). 1/8" ID ptfe tubing (various colors, etc.) = http://www.mcmaster.com/#tubing/=257xhh

Personally, I think 52365K615 is particularly appropriate for a reprap...

Btw, if the bend radius is an issue, all you should need to do is attach your motor to your nophead-designed skyhook (http://www.thingiverse.com/thing:85) instead of the side of the reprap.

Aren't we drifting a little away from the original design goals of RepRap? Elegant though this design is, it adds one more component to the design that cannot be replicated by the machine, and this one's a lot more specialised than just bolts or bearings.

I looked into the tubing, eD and Adrian used pure PTFE tube, so the Coefficient of Friction (CoF) is somewhere around 0.04 to 0.07. The listed part on McMaster is Delrin AF, CoF of 0.12 to 0.15. MUCH stronger, probably flexes less, but also less spring. I just looked at the properties for HDPE, and they are mechanically halfway between the two, but the CoF is about 0.15. So, technically, we might be able to figure out how to extrude an HDPE tube instead.

This would work with the color scheme and also let you "see" if you have something wrong within the tube.

This looks like a viable method to have two independantly fed printing nozzles/tubes in one print head using a common heater block.

Questions does your PTFE tube go all the way through the Peek and into the heated barrel ?? I guess this would mitigate some of the sticking issues that Nop and the guys noted.

Hmm thinking about it a little more it should work well with Vic's input on lathe less extruders too. Maybe get rid of the heatsink.

eD, as you know I'm also using the Bowden cable, similar to your setup (really liking it, especially with reversing to eliminate oozing).

I'm also interested in putting the PTFE further down into my PEEK insulation barrel (reduce friction), but I'm not sure whether it will attach very well. How did you get it fixated?

Right now I'm using a coupling printed coupling that has a long surface of contact with the PTFE tube so that it glues strongly into it.

Bowden is the future.

I roughed up the end of the ptfe end, lined it with super-glue, then shoved it in the PEEK. Job done. Make sure you rough it up good and proper though.

tnx
Did that for my connectors (sanding and many cuts along the tube). PTFE directly into PEEK reduces complexity, risk of misalignment and some more friction. Good to know it will work. Luckily my connector is still good so that the extruder drive mechanism can be (de)coupled to/from RepRap compatible extruders.

Talked with nophead on the bowden idea, he reminded me that a (printed!) modular bowden segment could be created from HDPE, since that's very low-friction as well. The cable guide that's already online could even work!
http://www.thingiverse.com/thing:973