I've been trying out the support material in Skeinforge and said I'd post some pictures. The settings have not been fine tuned but I'm still very pleased with the results. The object was a simple test shape it is 100mm tall and 30mmØ the columns are 8mm x 2.5mm and the column length is 75mm. So quite a delicate shape.

Skeinforge generated a good support structure and it printed OK with our firmware the head goes to a rest position every time the temp changes so it did this approx 500 times (twice every layer) as the support went down at 235°C and the Print at 250°C this in turn lead to lots of hairs coming from the print. I resisted removing them during the print and wanted to know if it would work with Zero intervention, it did :-)

The print took about 1/2 hour to clean up and the support was better stuck than I would have liked, in removing it I broke the columns, this was a little upsetting up until the point I realised I could glue it back together and the join was invisible and as strong as the rest of the model, I also figured that it was not an unacceptable solution as the end result is a very acceptable print (well I think so for zero tuning). 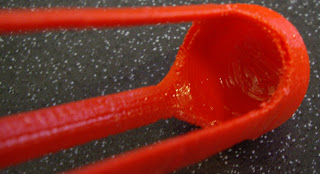 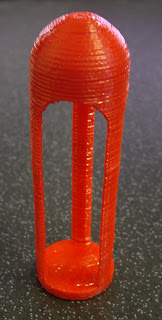 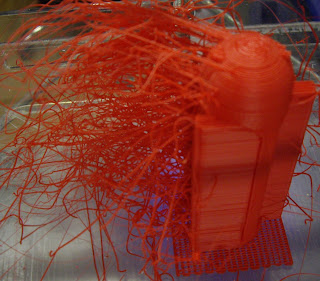 Comments:
It does look a little 'hairy' in the bottom photo! Nice print though.

Is it possible to have a second material just for supports? In that video posted a while ago with Jay Lenno where they made a replacement part for a steam engine, they used a printer that had some kind of soluble material that was used for voids or supports. Once the print was finished, I guess they ran it through a solvent and the support material was removed. They printed a working piston and crank in one job, which is pretty impressive.

I don't know what that support material would be, but it seems like an important step. You could then make parts that nest and don't need assembly.

I forgot to add that this is pretty cool. I've been following your progress and I can't wait to have a printer some day.

Ian: Congratulations on having made serious progress on support materials, the lack of which in Reprap I've been bitching about for several years.

Hey, I'm a student at UC Berkeley and they have a 3D printer that prints with two materials. They have the option of making the second one soluble and I've seen items they made using the soluble material. It's pretty amazing, gears already movable in a box and no assembly required. I'll try to find out what material it is, but I definitely know it's possible and well worth the time to find out what it is.

This suggests, to me, an optimization, timewise -- instead of moving to the rest position, compute the closest postition more then N mm from any existing extrustion, and rest it there. On the other hand, the extruder is already on it's way to the correct tempurature while it is moving to the rest postition, presumably, so that wouldn't help timewise, just lower the length of the hair.

Actually, moving to a closer position could help timewise for the return to printing the object.

Maybe a tuning parameter that has the support material use a larger inter gap z value until it reaches the top layer?

Skip every other layer, so that it sags between layers and is in individual strings. That way is apparent what needs to broken off.

Imagine the above layers as a support dome.

Is the support placed at the same time (slice) as the primary material? If not, perhaps you could extrude the entire support structure and then coat (spray or brush) it with a release compound that would prevent the build material from adhering to it. Kinda messy and manual, but who knows?

Its printed in the same slice otherwise the printhead would collide with the support when printing the final object. Thats the reason why eachl ayer has two temperature changes. I was thinking about that release agent too. When you would have a small brush on the printhead that would lay down a layer of release agent on the last layer of support before the object is printed on top. Something like that.

I noticed that with a 150 degree C heated soldering iron you can easily 'fix' white stains/scars on the object. With a hotter soldering iron, you don't even need to touch the object and it regains its colour again. It has to do with the pigment distribution becoming distorted by breaking off plastic.

Yes I have also found that ABS bruises can be healed with a hot air gun: hydraraptor.blogspot.com/2008/10/pot-black