Hi! It’s been a bit mad getting all the admin out of the way this end, but finally I get to post what I’ve been tinkering with recently: my take on the Wedge design exercise (from a previous post, here).

Vik’s been testing out the concept in the real world and it looks like things might check out! Meanwhile I’ve been working on incorporating self-manufactured parts into my take on the concept, below (if you want a virtual fly through of the design, check out the notes at the end of this post). 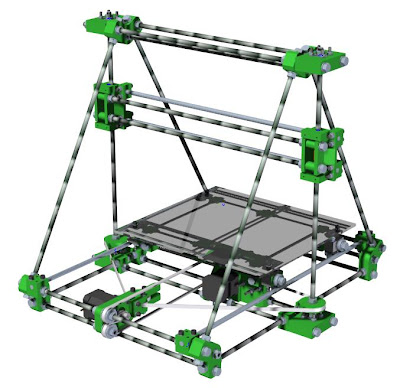 - This is a first cut only! Still some elements to be included. Also some things are just in here out of convenience. For example, round bars are used as bearing surfaces because I have them in stock. Will move over to Vik’s idea (angle iron is more ubiquitous) when fully proven.
- Uses NEMA 17s
- Top studding will be used as tool-change gantry.
- Footprint is 500 mm x 500 mm
- Woking area is currently roughly 250 mm x 200 mm, this will be optimised of course

I can recommend using the Cosmo Player VRML plugin with the Firefox browser (though if that doesn’t work out, try here)

Comments:
Must admit great as the wooden one is I like the look of this one better.

The belts and pulleys could be simplified and minimised by using a single length of timing belt (anchored at each side) with the drive being a sprocket on the moving bit with the timing belt around 1/2 to 2/3 of the sprocket and a pair of idlers to keep the timing belt placed and aligned with the anchored ends correctly.

"getting all the admin out of the way this end" == writing a PhD thesis and being examined on it...

(Actually, we're moving into a dedicated RepRap lab at Bath, too, and Ed's been organizing that. Among other things, this involved moving an 0.5 tonne £50K coordinate measuring machine that turned out to be 7.3mm wider than the lab's door, which had been built after it had been installed... Pix, live streaming video of new lab etc soon...)

I'm keen on preserving the option of threaded rod drive instead of belt. A NEMA17 (when obtainable) costs NZ$99 and a tin-can stepper NZ$25 - you can outfit the entire design with thread drive for the cost of one NEMA17. This ignores the belt, which is not available here.

Sure, belt & NEMA17 will be faster but it will be no more accurate. Cheapskates need RepRaps too :)

There. Fixed that for you.

i think aka47 is talking about something like this but without the fixed "rack" belt:
http://www.designnews.com/article/160365-A_Better_Belt_Drive.php

Love the new design. I assume that I will be able to print all the parts with the upcoming Cupcake CNC?

I think there is going to be a need for two designs, one aimed at performance and one at low cost. It isn't resonable to expect the vast majority of builders in North America and Europe to build a design limited to materials available in the southern hemisphere and the third world.

Accuracy, speed and cheap seem to be one of those things where you can only have two out of three.

Nice approach 47 (thanks for the link fenn), I had tended away from that because it burns more energy having to move the motor weight as well. However, its simplicity is beautiful. Certainly worth the experiment afterwards I think.

Just to clarify, this design is a first cut. I'm all for modding the design towards cheapskate after I've got my first cut working - right now I'm simply basing my first cut on the resources I have available now so I can actually test the thing. Soon as Vik and I have fully tested machines, we need to assimilate.

Nop, I think you're right, but perhaps an ideal would be one design which caters from both ends of the cheapskate/professional spectrum.

Nice drawing looks like you have put a lot of thought into it. One thing do you really need to twist the belt? Can't you just turn the motor? Twisting the belt prevents the use of bike chain or other rigid belt types.

I realize the supporting rods would need to be spread more to fit the motor but that shouldn't be too hard.

Yup the belt idea was similar except the belt drive I saw that gave me the idea was hanging in space rather than being sat on a rack.

It was on a Dimension RP machine at the University.

Funnily enough the dimension machines look to be moving towards snap off support made of the same/similar material but laid up in a sparse pattern. I guess they may also be using a similar technique to Nopheads temperature change to get the separation to work.

What was the fix for the machine move ??

Dissasembly of frame or machine ??

PS I am with vik on the threaded rod as I hate the belts and their associated cost.

> Can't you just turn the motor?

Yeah I know, but I spent a day looking for an efficient way of avoiding the twist and not getting a clash, or a semi-ridiculous housing, but couldn't see it... _serious_ suggestions welcome!

> What was the fix for the machine move ?? Dissasembly of frame or machine ??

Puts a NEMA17 on each side of the reprap for balance.