I don't know if this is useful to anyone, but I recently tried using the inner diameter of a skate bearing as a linear bearing on an 8mm (or 5/16") ground bar. It slid up and down really well - good enough to be used as a bearing in a mechanical design. I'm not sure if this scales yet (i.e. will a 625 bearing work on a 5mm bar too?) and performance might not be quite as slick as a proper bush/recirculating linear bearing, but man it's such a cheap hack! 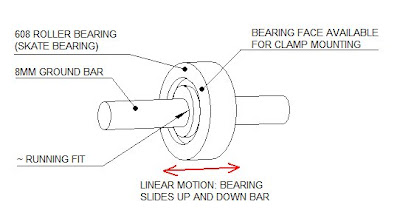 From the self-manufacturing point of view, having recently (personally) accepted the ball-bearing as a vitamin part I'm finding this capability to be awesome.

Comments:
So even skate bearings are a little expensive in comparison to plain bearings. Have a look at mcmaster's plain bearings

They are designed for rotation not linear motion, but neither are skate bearings. I know mcmaster is not internationally friendly but you can get plain bronze or plastic bushings at your hardware store.

Mounting a plain bearing is just a easy as mounting a skate bearing, drill a hole and press the bearing in(for wood and plastics anyhow).

Skate bearings expensive compared to plain bearings? Could have fooled me. :-s

Plain bearings, as in bushings, a cylinder with a hole in it. No moving parts. $0.20-$0.60 each, in large quantities even lower. You can get plain bearings that are much longer than a skate bearing. A longer bearing for a linear slide will have less play than the short skate bearing.

I think it is a good idea if you have lots of skate bearings around. But I think a better bearing to use would be a bronze or plastic plain bearing (bushing). But I'm just a guy.

We can extrude HDPE bushings and I would expect them to work well. My filament guide is HDPE. It is very slippery and even though there is very high pressure on it, it seems not to wear much.

Is there a reason to use this instead of a bronze bushing? I don't know about you, but I can pick up sintered bronze sleeve bearings at my local hardware store and they're quite reasonably priced.

I guess a useful wrinkle is that you could use a driven shaft (rotary) additionaly as a support shaft (maybe for a carriage assembly X axis) with a sliding component and get it all out of one bearing.

I think I am thinking here of the Wedge mechanism.

Fun to think about but may have problems in practice...

I really like the idea of sintering bronze at home, from parts cast into a RepRapped mold. That would keep bushings from being a vitamin part.

It would also allow the patterning of metal without melting it.

I have actually been using this technique on my repstrap for about a month now. I haven't encountered any friction problems or locking, but I have been pretty good about putting WD40 on it every couple builds or so. See cpwebste.blogspot.com for pictures

COOL! Never done that before... (or missed if previously discussed) any link?

You might consider using 3-in-1 oil (aka sewing machine oil aka machine oil) rather than WD-40. Because it is not intended as a penetrant, this sort of oil is slightly heavier, making it a better lubricant and less prone to evaporation. It will likely be much cheaper, especially in the long run, and will save you the effort of re-applying.

@eD: What sort of link did you want? Here's a decent academic paper on the powder metallurgy of bronze, if that's what you meant.

The thing about bushings is that I don't find them in my local hardware store. I can find skate bearings, so that's one less thing to track down.

The underlying problem is that 8mm ground steel rod is a special order item for me (that's $50 delivery for a start). I'm not sure it's a good candidate for a vitamin part.