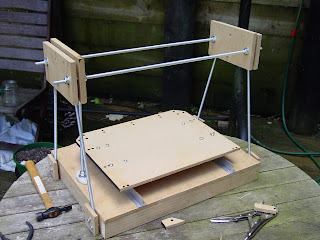 Ed has been discussing a proposal for a wedge-shaped version of the RepRap, using fewer components and being more easily manufactured than the existing box frame. One of the things we wanted to know was how badly it needed cross-bracing. So, I sliced & diced some MDF to give us an idea of how things might be spaced out, and to experiment with the bracing so I can have the rigidity and still maintain the same build volume as a Darwin.

Well, just 4 struts definitely isn't a stable design. Things wave about quite a bit under moderate load - which bodes badly for movement at just the wrong vibration frequency. Further mucking around revealed that this could be much reduced by bracing and I'm still fiddling with that to see how little I can get away with. 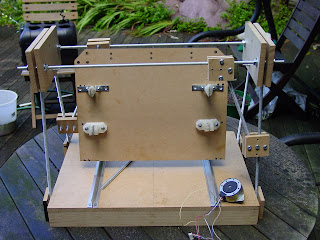 Here's a shot showing the underside. Two of the X sliders are RepRapped by the way, and two are made from galvanised corner brackets and Polymorph. I thought it might be a good idea to make as many parts as possible in a way that could be replicated by hand if necessary.

I'd like to have the option of moving the axes with either motors & belts or threaded rod in the next design. In some parts of the world, high-quality steppers are unobtainable and so it makes sense to leave the path open to using current stepper/belt systems, develop DC-servo systems, and if all else fails drive it with a slow, old-fashioned threaded rod.

I'm not expecting this particular model to actually move properly, but if it does it'll be a really cheap way of putting RepRaps together.

Comments:
Alas I though I was fairly unique in building a design based of eD's Reduced Frame RepRap sketch. I'm using Nylon blocks at the tops and some general plastic right angles for the rest. As for the rest I'm using standard BZP M6 rod.

As I'm not yet attached my uprights to a baseboard I'm not able to get any feedback on the actual frame. However One thing I've noticed is that you will need to drive the vertical axis from both ends for accuracy and stability. I'm sure this could be down with 2 motors, or a belt drive, or some variation thereof.

Personally I think this design is more of a reprapable repstrap. It can make it's own parts but it would not be as accurate as a full Darwin.

Can you post a photo of the bottom of the table please? I'd be curious to see how your polycap parts interact with the t-rails. Is there a lot of play in the fit?

I've just started making a repstrap out of aluminium 'U' frames myself.

I thought the plan was to angle the ends inwards too - so that the large rectangular sides would become rhombus's (rhombi?). That ought to reduce (and one would hope, eliminate) end-to-end wobble.

Another thought - is it possible to merely extend the diagonal members and have them meet at a point higher above the machine where they could be connected and thereby form much more rigid triangles? It would make the machine much taller than it needs to be - but I doubt that matters in most practical uses of the final machine.

Driving the two Z rods is probably going to be done with a chain initially, but might switch to a driveshaft.

In theory, the threaded drive will make it more accurate than Darwin.

I want to keep unsupported lengths of studding as short as possible because the stuff actually bends quite a lot. Experiments last night suggest that 4x 300mm bits of studding will adequately cross-brace the frame.