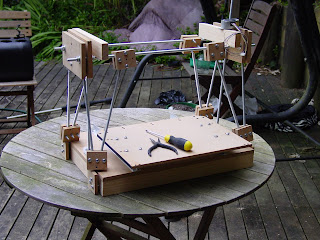 I've been finding a few moments to cut & fit M8 bracing to the Wedge wooden prototype (The Wedgewoods were a good friend of Darwin BTW). Four lengths of 325mm (could probably go to 330mm) seem to make it stiff enough. I discovered that 5 holes in bits of MDF turns them into handy clamps that work at a variety of planar junctions. The top of the horizontal threaded bar is 305mm above the upper surface of the base, in case you want some scale.

I've roughly laid out where the vertical Z axis drive rods will go (like the reprap'd bearing holders?), and a possible place for mounting the Z motor - maybe a little closer to the horizontal crossbars though. For the moment I'll drive the 2 vertical shafts with printable Z gears as used in the Darwin Child, but might switch to a driveshaft or at least give one as an option to avoid buying chain. Using a driveshaft would require 2 more bearings, reprap'd gears and more threaded rod but I can see some people might want to do it.

Now which to do? I want to work on the paste extruder, the Wedge Y axis and the Wedge Z axis (which will have to evolve in parallel with the X axis and carriage). Place your votes while I go to First Responder training...

Comments:
In order to make the x-axis wider or the machine narrower can you just put the bracing on just one of the x-rails? The carriage is narrower on one side, so if that were the side the bracing were on you would get a little more room.

The limit is going to be the movement of the head carriage, I think.

How about just using a sturdy 2" * 4" or similar piece of wood at both edges, and anchor them with some L shaped iron pieces with pre-made holes that are used for house building and similar? Precision probably wouldn't be that good, but it could always be adjusted in the fastenings of the top cage. They would probably be quite steady though, and cheaper, faster, and easier to assemble than four threaded rods for each side.

The problem with 2x4 is that it does warp and twist as the moisture content changes. Threaded rod isn't so vulnerable.

Plus it's a bloody sight easier to reposition clamped threaded rod than nailed-down 2x4 :)

But do remember that the primary aim was to test the bracing for Ed's Wedge design out in a hurry, not to develop a RepRap per se. I do seem to have become somewhat carried away though.

Yeah that looks cool! Great to see the corner bracing approach is strong enough... will use that then as its implications on working volume are excellent.

I've started to get my version of this a bit further ahead. Student housing is fairly restrictive in what you can do.

I really need to start putting it on a baseboard...