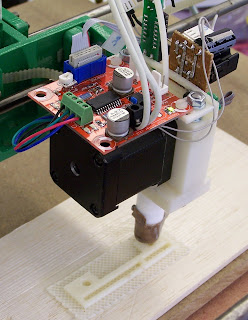 The Thermoplast Extruder Version 2.0 - the new pinch-wheel design - has been released. It has these advantages:
I've been running it for a couple of weeks now, and it goes very sweetly, particularly with ABS (shown above). And it's really superb with polylactic acid. On my home Darwin I build with that at carriage speeds of 3000 mm per minute, which is fast, and - of course, unlike ABS - it doesn't distort as it cools. This means perfect parts quick - what's not to like?

Comments:
Pretty cool!
Will the CupCake CNC work with this extruder?

Last time you blogged about the stepper driven pinch wheel extruder, you said that the Arduino didn't have enough memory to run the software. I take it the code has been streamlined since then?

Thank you perfect timing!
I await my delivery of ABS orderd last week.

I'd also like to know about running this with an Arduino. This is awesome though, I've been waiting for something better/simpler than the screw driven extruder.

Twinsen/CupCake CNC - should do; check with Zach on the CupCake extruder mountings. This assumes two M5 screws in line with the extruder 33 mm apart, which is the standard RepRap X carriage.

Corwin/Cameron/Arduino - yes, the code now runs on both the Arduino and Sanguino. Turns out I just needed to tidy it up a bit. I haven't done extensive testing on the Arduino yet, though - I hope to do that at the end of next week (Ed and I are moving RepRap to a new university lab at the moment...)

yes, this should work with the cupcake CNC. we'll be launching with the lasercut plastruder which this design was based on.

the problem with this design is that the stepper motor shaft is hard to make. we use a low-rpm, high strength DC motor with a timing pulley. the pulley just bolts on to the shaft of the motor, so its super easy.

they're both pretty much the same thing though. =)

Actually, sticking a gear on instead of messing wit the shaft is an option on this one too. See http://reprap.org/bin/view/Main/ThermoplastExtruder_2_0#Adding_a_small_gear_wheel