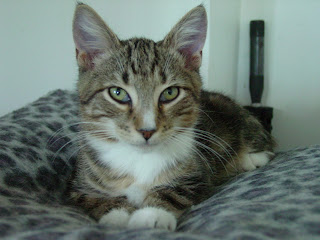 When testing stepper motors out by sticking some paper tape to the axle and firing up a test program, do not allow kittens on the bench. My rescue-kitty "Mitre" saw the little flag going round and round - and ate it.

Oh, he used my keyboard as a springboard en route. He's not one to pass up an opportunity. His next exploit appears to be to put PLA in his litter tray via his digestive tract. I know it is bio-compatible, but that's not the point.

I think its time kitty left the workshop.

No Mitre! Not the keyboard cab

Ours, "Pixel" likes plastic filament too. He can't get enough of those springy coils. And he likes "Charles" (my RepRap Darwin) and likes to sit in it.

Yes, most of my kittys like to sit in the RepRaps. Mitre does it when the big cats are hassling him.

Mind you, he is not in good favour at present, having mistaken Suz's laptop for a litter tray.

was the laptop a dell? I seen one cat do it. LOLz.