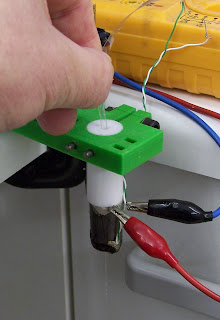 Over on the Builder's Blog Paul Midgley had the brilliant idea of cutting polyethylene terephthalate (PET) drink bottles into helical strips and using them as a RepRap extruder feedstock. I thought of folding the strip in half to make it stiffer (and hence easier to push into the melt zone).

So. Time for an experiment. I took my old screw-drive extruder (now replaced by the rapidly coming-together pinch-wheel design), clamped it to the bench, cut a very crude strip of PET from a drink bottle about 6mm wide, folded it in half, and pushed it into the nozzle by hand.

It extruded well at about 230 oC. It behaved in very similar way to polylactic acid, though that will extrude at about 180 oC.

Cutting the strip in production should be fairly straightforward using a blade held 6mm from a barrier, and simply pulling on the forming strip. The pull could even come from the extruder. The pinch-wheel design could both generate the pull, and - with a small redesign of the polymer channel - automatically start the fold, which would then be completed by the pinch wheel.

When it was cooling, I pulled it back out to see what had happened: 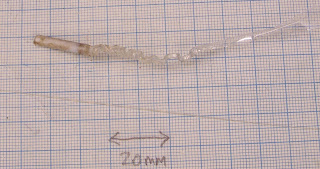 As you would expect, the strip had concertinaed in the wider nozzle channel (top of this picture). This didn't stop the device working at all, but in a real extruder it would lead to a lack of controllability because of the springiness of the zig-zag. This would be easy to fix simply by designing the channel to be the thickness of the folded strip.

The PET at the tip set cloudy, when the original was clear. I suspect that this means that it's become semi-crystaline as opposed to amorphous (see the PET Wikipedia entry). What this means for objects built from PET remains to be seen.

The filament created is at the bottom of this picture, incidentally.

Comments:
Odd that you can extrude it below its melting point!

Yup - that's what I thought. But it comes out pretty runny. My temperature measuring is a thermocouple straight into my multimeter K-junction, but it may be a little off centre, and so a few degreed colder than the polymer. But 30 C below seems unlikely.

Of course, the whole idea of a melting point for a polymer is a rather elastic concept (if that's the right metaphor) anyway...

Could this same method work using plastic Milk bottles I beleve they are made from Hdpe.
The next qestion would then be if it is possible to recycle.
By extrudeing objects from strips, roughtly how many 2ltr drinks containers would you extimate would be needed to extrude a set of reprap parts?

Thoughts of local reclying in my own street, poping into my head now.

I guess parts like the screw thread for the lid would not be easy to use this would need to be deducted from the above weights.

This is not just about feedstock, it's about independence :) It means that people might be able to bootstrap a machine without needing a specific filament.

Maybe the melting point changes because PET absorbs water.
"PET is hygroscopic, meaning that it naturally absorbs water from its surroundings. However, when this 'damp' PET is then heated, the water hydrolyzes the PET, decreasing its resilience."
http://en.wikipedia.org/wiki/Polyethylene_terephthalate#Drying

I guess that hydrolysis would change the chemical and material properties of PET...
Under the #Crystals heading, there are also some details that might explain the clouding.

Mendel should be lighter yet.

I don't know how the hydrolysis will affect the usability and strength of the parts, though I can say that the cloudy bit I took out of the nozzle seems pretty tough.

Interesting lets say we only get 60% of usable HDPE from a milk bottle and we use the honeycomb interior.

Correction: Forrest's just reminded me that the weight of the solid Darwin parts is about 1.4 kg.