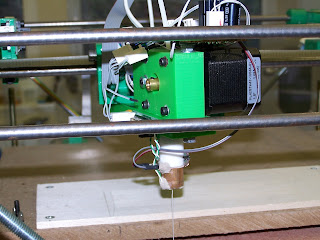 Inspired by Zach's lasercut pinch-wheel extruder and a comment from Ian ("I bet you could drive that direct with a stepper motor.") I decided to do just that and to create an RP design that RepRap could make.

Unfortunately, my RepRap was in bits having a couple of new toothed-belt cogs fitted, so I had to make this one in the Strat. 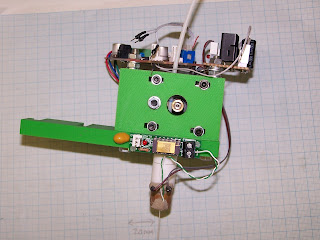 What's more, it only has two RP parts: the clamp that holds the heated barrel and attaches the device to the RepRap machine, and the pinch device itself. Here the whole thing is being driven by Zach's new stepper driver. 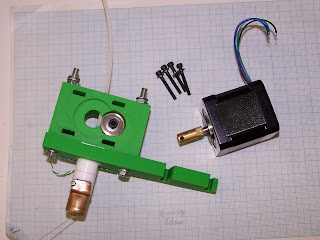 Here it is in bits. As you can see I put a brass collar on the stepper shaft. The collar has a knurled section to drive the plastic filament. (Improvement: I suspect it'll be possible to knurl the stepper motor's shaft itself and to get rid of that brass bit.) The filament is squashed against a ball race. (Improvement: use a smaller ball race and cut the size down.) Neither the ball race nor the collar need any sort of groove to guide the plastic - that is achieved by the hole down the block through which it runs.

I adjust the gap by sliding the whole motor in slots, rather than the more obvious method of having a slot for the ball race. This allows the latter to be very firmly mounted, and means that there are four sliding screws achieving the adjustment, which again makes things very sturdy when it's all tightened up. To get the gap, I just put a 2.5mm drill down it, push the motor against that, and tighten the screws. That compresses the 3mm filament into the knurl-ridges by 0.5 mm, which seems fine for ABS.

I'm driving it by a modified version of the GCode firmware running on a Sanguino. I need to get the hang of the timer interrupts as I don't yet have the resolution to make fine speed adjustments. That is one point: the stepper is running very slowly - about 4 steps per second. The elasticity in the system seems to smooth out the flow, though - you can see a very slight jerkiness as it comes out of the nozzle, but I don't think that will cause too much trouble.

Finally, I tried a new way of mounting the PTFE in the clamp: 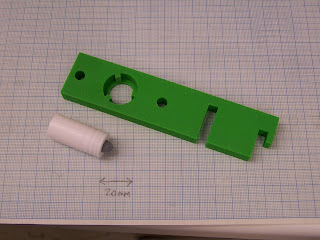 I put the PTFE in a Black and Decker and used a triangle file to run grooves in the top of it. (The little blob of Blu Tack is to prevent contamination.) I made a hole with three support webs in into which it just fits. 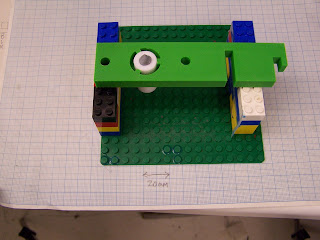 Then I set it up like this, put more Blu Tack round underneath to seal it, and poured PU resin into the gap alongside the support webs. It set, and made a very solid join. I suspect that any thermoset like Araldite or JB Weld would work just as well as PU.

This was the prototype (for example it uses a very non-standard ball race that I just happened to have in a drawer). I'll do a proper design and stick it in the repository ASAP.

Comments:
So you're driving it with a bipolar NEMA 23? What sort of torque is that thing producing?

Yeah, you're right. A NEMA 17 is about 40x40 mm on the mounting plate. That thing is sitting on a centimeter grid and does that. It looks thicker along the axis than an ordinary NEMA 17, though.

Dunno what the torque is. If I get the chance I'll set it to lifting some weighs and see when it stalls.

Nophead suggests gearing down the motor so it can step faster and hence drive more smoothly. I'd rather microstep and avoid the gearing - I want it as mechanically simple as possible.

would you be interested in helping design a dc motor compatible one? my 3d design skills are pretty bad compared to my 2d design skills.

Of course. I think the ideal would be to make one that either a stepper or a DC motor could be fitted to.

Presently designing a 32:1 gear train for the GM-17. It has three levels, plus an power sprocket. It looks like it should fit in a 75 mm x 100 mm x 25 mm box. I'm pretty sure that Chris could reduce those dimensions with that 0.3 mm extrusion nozzle of his.

I've been looking hard at the pics and now I'm really puzzled. How is that PTFE thermal break kept from being pushed out of that nice green base block by the filament being pushed into it by the pinch wheel?

I'm sure it is, because you're extruding with it. I just can't see how, though. :-s

wouldn't microstepping dramatically decrease the torque of the stepper motor? would it be possible to avoid gearing by using a smaller pinch wheel?

Sorry Forrest - there's an "After" picture that is merely implied: the one where the gaps round the PTFE have had PU resin poured into them and it's set...

Microstepping would be good, though it doesn't seem essential. See the next blog, which also has a smaller diameter drive - the stepper shaft itself...

While microstepping would make it smoother, gearing would allow a smaller motor, which would be cheaper and lighter.

There is a lot to be said for simplicity though and without gearing you can back up very quickly to halt the flow and then step forward very quickly to take up the slack when you start again.

And gears would be something else to wear out.

you could reduce the gear ratio on the brass thingy by turning down a small section on the end and knurling it: (excuse the ascii art)

this would probably put too much force/wear on the stepper bearing because of the increased leverage, but you could easily machine a standard 8mm ball bearing seat on the end of the brass thingy after the knurled section, which is a good idea anyway.