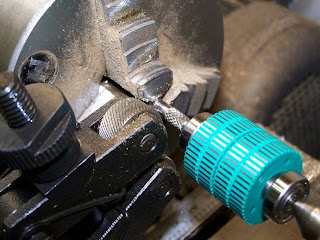 It does turn out to be possible to knurl a stepper shaft (see blog immediately below). As you can see, I had to take the rotor out to do it. Minus point: needs fancy kit (knurling head, lathe). Plus point: only took a few seconds, so someone could do hundreds in an afternoon. The new extruder now has one fewer parts...

Tip: clean it really really thoroughly before you re-assemble the stepper...

Here's a vid of it working with ABS:


See how fast it runs! Note how it stops and starts on a dime! Of course, the faster we extrude the faster we can build things, and - what's more - the less significant dwells and melt ooze become.

If I may be permitted to quote Zach: Yay!

Comments:
Wow, that looks nice.
I'm gonna have to make one of those...once I get the bot and extruder I do have up and running, that is.

Is that rotor really plastic with little embedded magnets? Looking at your pic, that's certainly what it looks like.

a few comments though:

how thoroughly have you tested it? many of the things i tried (before the timing pulley) worked... for a few minutes or even longer. have you tried running it for 1 to 2 hours? doing some prints is another good test.

how well does it handle various external forces? can you pull on the filament and it continues to feed? how hard can you pull before the knurling strips the ABS? does it recover from having stripped the plastic?

with a timing pulley, it feeds very strongly. i cannot stop it out with my bare hands (aka it will easily self-feed from a spool)

if it does strip, it simply shears that 'tooth' off the abs, and when the pulley rotates, the sheared part will simply drop off the timing pulley into the small crevice around the pulley. this could happen many times before it would need to be cleaned. the pulley itself will never get clogged with ABS 'dust' or such. i would worry about that with a knurled surface.

finally, and the thing that i really dont like is the custom machining. for me it comes down to a question of time and money:

SDP-SI sells pulleys in our quantities for roughly $5.00. its an off the shelf part that bolts onto the motor shaft and then you're done.

if the knurling technique is superior, then it makes the specification and construction process much harder. either we:

1. have to find a supplier that will sell us pre-made motors with built-in knurling on the shafts

2. we pay someone to take premade motors and have the shafts knurled

3. people at home are left to do the whole thing themselves.

with #3 i just dont even wanna go there.

* dealing with manufacturers sucks. someone will have to do this. i highly doubt you'll be able to find this as an off the shelf item. i really really dont want to, as i've already found a working solution. too many other things to do.

excellent work, but sometimes its not entirely an engineering problem... not when you're trying to put one of these in every house in the world ;)

> Is that rotor really plastic...

No - that's just a polymer coating they've put on it. It's a rare-earth magnet of some sort.

Seem happy to mis-treat stepper shafts in more ways than you can shake a stick at. I'll e-mail them and ask them.

Is there a reason why you didn't go with the brass collar idea? We could switch to another material to make it more durable.

Also, knurling a collar should be much cheaper and easier than knurling a whole shaft. I could easily see someone knurling a large number of collars and selling them through the RRRF or similar place. Shipping would be minor and we wouldn't be tied to a specific manufacturer like Lin Engineering (who has very expensive stepper AFAIK).

What diameter was the shaft?

Are the motor bearings ball bearings?

I assume this is part of a longer term shift towards using steppers to drive the extruders like bfb has been doing. Will there still be support for motors in the long term, or will this fade away.

My main reason for wanting to know this is because It's easier to control a motor for driving a parallel extruder since you can just split the signal wire for one pretty easily, while steppers are more complex. I want to start placing multiple extruders running off of a single axis in the future(like the new extruder design was originally made for in it's pillars of hercules mode), and steppers and heavier to use and add weight to the carriage.

> Is there a reason why you didn't
> go with the brass collar idea?

I'm not abandoning that - merely looking at alternatives. It was so sweet when the idea worked, that's all. Plus we want the smallest diameter possible.

> What diameter was the shaft?

> Are the motor bearings ball
> bearings?

Yes - you can just see them in the lathe picture.

Not necessarily. For example, we're not short of memory in the Sanguino, so I left the DC motor driver code in there and just added the stepper stuff. (I'll check it back in to the repository when I've debugged the step-timing code, which still ain't quite right.) Plus Zach's latest extruder controller PCB will drive both. I like the idea of maximising the choices of technologies...

letsburn00,
I think paralleling steppers is easier than DC motors. That is what I did with my z-axis. They all keep in step.

With a DC motor you need a shaft encoder as the speed vararies with load and temperature. So for multiple extruders you would need multiple control loops.

With steppers you can either parallel the coils if your driver has enough current rating or use multiple drivers from the same control signals.

Do you think the fast response will do away with the need for a Valve?

A splined shaft might work as well or better and is more likely to be found on a standard product.

That was exactly my thought to re use an old hard drive stepper motor like this one:-

I just do not know if it would have enough tourque for the job though ?

Dr. Bowyer,
Is there any chance of a version of the arduino firmware that runs a stepper extruder instead of a DC motor, or is there not enough room on the chip?

Does the stringing effect change with this? It looks like the filament doesn't string - I was wondering if you paused a while before moving if the filament would cool and just break off?

> Is there any chance of a version of
> the arduino firmware that runs a
> stepper extruder instead of a DC
> motor, or is there not enough room on
> the chip?

Afraid it won't fit in the Arduino. But it goes fine on the Sanguino - the code is now in the repository.

> Does the stringing effect change
> with this?

It's almost completely absent simply because the thing is extruding so fast. The contrast between that and the slow ooze when the motor stops is so great that - when the head moves away at its in-air-move speed, nothing gets left behind.

You get a little ooze when the machine is re-zeroing itself between layers (which is optional, of course) and that leaves a few flecks on the surface where the next layer starts. They can easily be brushed off by hand.

Fantastic! I must say that the work you guys are doing is excellent :-)

Is there any chance you could show a piece that used have lots of stringing against the same thing built with the new extruder with no stringing?

This is odd because I thought most of the stringing is due to the plastic being elastically compressed, so that it carries on extruding after the feed stops.

Certainly faster head movement between threads reduces the effect, but extruding faster makes it worse, if anything, because the pressure is higher.

A stepper stops instantaneously whereas a gearmotor has some inertia, but all the same I am surprised this is significant. With such a high torque load the GM3 stops pretty quick. I can see filament extruding long after I hear the motor stop.

Are you reversing the motor?

Any further insights into why it is dramatically better?