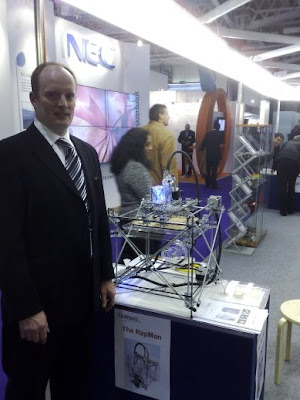 No, not Will Smith, but reprapper Ian Adkins of Bits form Bytes at the BETT 2009 Show at Olympia in London with his latest version of RepRap, which is being sold as a kit into the education market and elsewhere by Unimatic Ltd. It's based on his previous lasercut version but with some neat additions, like a better extruder and a built-in filament reel. It's also driven by PIC32-based electronics that Ian's developed. All designs etc. will be posted online as soon as we get our breath back.

If you're near London why not drop in? It's just up the road from Earls Court tube, or get the special exhibition train to Olympia.

Congratulations! Ian that's a good show I was there with my company Soft Stuff Software in 1990 thanks to Commodore & Class of the Nintys Amiga pack we sold 15,000 of our product.

"And this is the reprap...a little idea we picked up from our friends at roswell."

Hopefully your sales will go awesome. Ian seems to have the only company I can think of that in the past year has actually been growing instead of weakening.

Too bad my student cards for free public transport isn't valid on aircraft and outside of the Netherlands, otherwise I'd surely have come, just to see a real one :P

I did!
Met Adrian at BETT and had great fun discussing the potential for RepRap!

Absolutely love the machine.. now all i've got to do is get my hands on one!

Thanks for all the comments but it's only as a result of all the communities hard work that many schools will have affordable 3D printing which will hopefully inspire a new genration of Engineers & Reprappers :-)