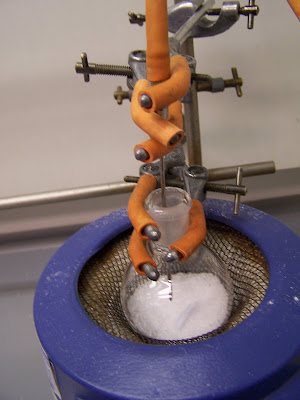 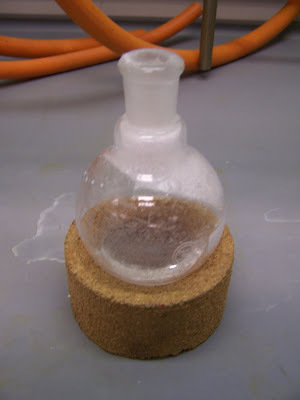 Now to get from starch to lactic acid.

So what happens if you break up some PLA, mix it with fresh lactic acid, and cook that? If that does produce more but longer-chain PLA, can we then partially decompose that back into shorter-chain PLA, and maintain vaguely stable material properties? It would be very cool to avoid needing a material supply other than lactic acid, even if it is in trace amounts.

jonored: Only the chains with catalyst will grow, but any decomposition process will break up all chains equally. Each chain cleavage leaves catalyst at the end of, at most, one daughter chain.

As material is added and taken away, the proportion of catalyst-terminated chains will gradually decline. I don't think "vaguely stable material properties" would be the result...especiall because properties are often quite dependent on polydispersity (i.e., chain lenght distribution).

There's an emulsion polymerization method which might be amenable to PLA manufacture. Pretty much just get the lactic acid into a solvent and then emulsify that with an immiscible liquid carrying a catalyst. The tiny droplet size in emulsions limits the chain length but supply of catalyst and temperature controls lower chain lengths. I realize that this isn't amenable to quick-and-dirty usage but it might be useful in other settings.

The finished emulsion may also be less energy-intensive to extrude than a melt, if the time to dry each layer of emulsion is long enough, and it can be made thick enough to hold up as a reasonably-sized layer.

Er...I meant, "if the time needed to dry each layer is tolerably short."

sorry, Joel, my explanation was too brief for correct understanding. The emulsion stage is just a step in the formation of a controlled-length polymer. The emulsion itself is not (as far as I know) extrudable. It's just a set of carrier solvents for the polymerization to occur in. The polymer powder would still have to be filtered out, rinsed and melted down into a manageable form.