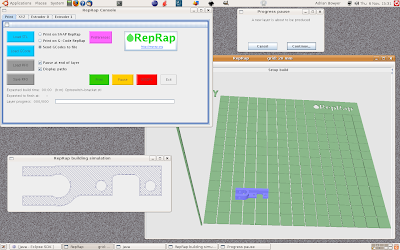 Comments:
Perfect timing, I'm about to start printing in 2D (with a felt tipped pen) today so i'll have the latest software.

since I have never used the software before, i'll be the perfect guinea pig for the new instructions.

just a thought: have you thought about releasing the software as a package for linux?

users would add repo.reprap.org to their repositories and could easily install all dependencies and get updates...

not sure how much work it is to set up something like this so this is just a suggestion off the top of my head without any real understanding behind it :)

Setting up a repository is a significant amount of work as there are differences between ubuntu and debian for instance which need to be taken into account for each supported linux distibution. And that is when dealing with deb style repositories there are also rpm's and other formats. (though usually debian and ubuntu are inter operable this is not always the case, and even if it works right now there might be a incompatibility introduced later.)

Hoping to get my own reprap in a few months and seeing the progress being made is fascinating and encouraging.

We're working on a set of packages that would unzip on Linux, Windows or a Mac and then run stand alone. But it wouldn't be a repo.reprap.org approach (yet - we want to do that too).

I like the Gcode options. One thing that would be really useful would be to display the Gcode files in the window, and then reposition them. Currently I'm cutting and pasting Gcodes together to do multiple part builds, then booting EMC's Axis software to do backplotting to check to make sure I haven't made any mistakes.

Have to build up a new extruder right now, but will try out the software soon.