Puddle to the Metal 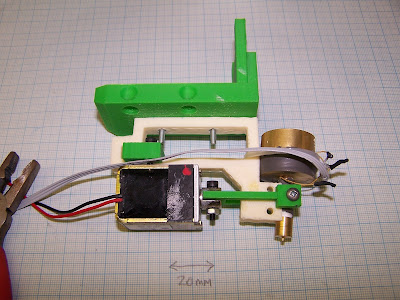 I don't normally blog mere links, but with progress being so rapid recently we'll revivify the metal-inlay extruder very soon so we can do electricity. So here are some materials that we could use for that:

Note that one would also be able to cast just about all of these in a silicone mould.

Comments:
Cool! I've been doing some reading lately, now that I've got into the milling PCBs and the like. One of the issues on conductor selection had to do with the electrical resistance. I'd not seen anything like figures on things like Field's metal and the like. Have you worked out what we can do in that regard and which sorts of materials it is going to let us use yet?

Höhne makes a conductive casting resin "EPL 701", has a conductivity of 0.1ohm /cm (at what width?) but apparently goes off pretty fast - needs to be used immediately once you open the tin. Also not sure what price is like - imagine it's high.

Are you sure it isn't listed as ohm-cm? That's the usual way to list resistivity.

In that case, you can figure the resistance of your conductor by (for example) dividing out the layer thickness in cm, then multiplying by the number of squares the electricity must pass though.

A 20 cm-long track, laid out in squares 5 mm wide, comes out to 40 squares. Same goes for 20 mm x 0.5mm. So a layer of 0.1 ohm-cm material deposited 1mm thick will have 1 ohm-per-square layer resistance, giving 40 ohms for this hypothetical 40-square conductor.