Ever since we decided to separate the computation of slices from the driving of the RepRap machine by writing the computed slice movements to a G-Code file then subsequently re-playing that on the machine, we have known that that strategy would improve quality. This is because it removes dwells and delays from the build caused by the slicing code having to perform (sometimes quite intensive) computations. The G Code file has exactly all the right speeds and delays in it, and there is no significant delay in transferring the commands to the RepRap machine from simply reading a file.

This improvement was confirmed experimentally and in production by Nophead's Hydraraptor work, and by Zach's ReplicatorG G-Code RepRap-driving program. 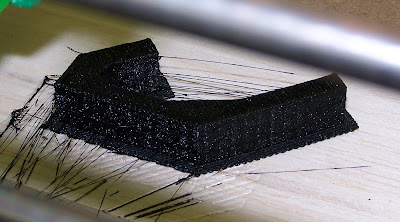 Here is the first build out of the standard RepRap Java host software updated as in the post below. It's the RepRap coat hook. I computed the slices and saved them to a GCode file (this took about 12 minutes). Then I replayed the file (this took about an hour and a half). This was on my home RepRap, driven by a Sanguino running the Sanguino GCode firmware extruding ABS at 240oC.

Above is the coat hook unretouced just after the build finished. 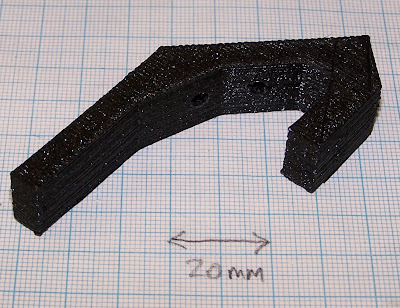 And here is it after brushing the hair off. The quality is almost as good as the superb results that Nophead gets, at which I am well-chuffed as I haven't finished tweaking the parameters yet.

One tiny bug became aparent: the Java hangs writing the GCodes to a file if the RepRap machine isn't plugged into the computer's USB port, even though nothing is going to the RepRap machine at that stage. Now I'm off to hunt that one down; I suspect I may have been too clever adjusting thread priorities...

Tomorrow, Ed and I will get together in the lab at Bath to make sure this all works with the Arduino (which we have on the lab machine) as well as the Sanguino.

Comments:
So am I right in thinking that you could convert a whole catalog of cad files (including the reprap parts) into Gcode, store it in a flash or other memory device like a burned eprom and thus do away with the entire need for a PC or laptop to drive this?

That must explain the LCD board in your next post, a simple menu selection would run well from such an interface.

You're right, printing G-Code off flash is utterly cool.

Forrest Higgs' Tommelise 2 can run both in on-line and off-line mode using an EEPROM chip like you mentioned. Based on a PIC with USB.

Tofletcher has also had some pretty promising results. He made prints entirely of an SD card with some microchip PIC based systems.

For the Arduino there are some file I/O routines around on the internet. No one published results with offline printing with that, but it can probably be done with Arduino/Sanguino too.

ooh you guys are in for a treat... the RepRap Motherboard (prototypes arrive today) contains a built in SD card slot which will enable us to print stuff directly off a card.

things are gonna be awesome.

)
I knew it would pay off to wait a bit with my next RRRF order. I can now get a sanguino, breakout board, LCD, mag. rotary encoder and a 'RepRap Motherboard'... there are so many new things!! You keep churning out new boards at an amazing rate.

I only wished shipping overseas wasn't that expensive! Another reason to be PCB milling soon :)

Zach, be sure to blog on RRRF (and perhaps also blog.reprap.org) that the motherboard is there! Any up-front details are welcome, but of course it may be nicer to have PCB photos in the first post about it.