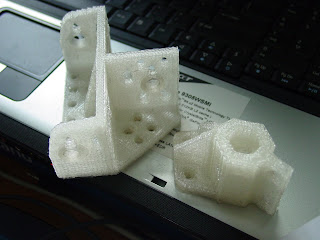 The Darwin has been busily churning out replacement parts for Phoenix, the rebuild of the original wrecked RRChild. The bed corner here is a standard support-free part, but the X Carriage has been modified to include an insert for all the places where the guide bars go through it. This fixes an issue whereby one of the holes (rightmost, in this picture) had a teardrop top in which the guide bar fitted very loosely.

The new carriage also features larger holes for the belts to pass through, which should allow some experimentation with fine-gauge ball-chain.

Im not clear about this.

Are the inserts made 'flat' (as they appear to be in the picture) and inserted in mid build.
Or inserted after build?
or made teardrop shaped to match the holes? Or just bought in as before but fitted in build etc....

They're all made flat and fitted afterwards. They are held in place on final assembly by a nut, bolt and a couple of washers at the apex of the teardrop.

If you use a full bearing insert I think the carriage is over constrained. The bars would have to be exactly parallel otherwise it will bind. The original design allows them to not be parallel by having the back bearing slot shaped.

I have solved the same problem by making a new part to replace the y-belt clamp they has a lower surface to make the bearing. I will blog it soon.